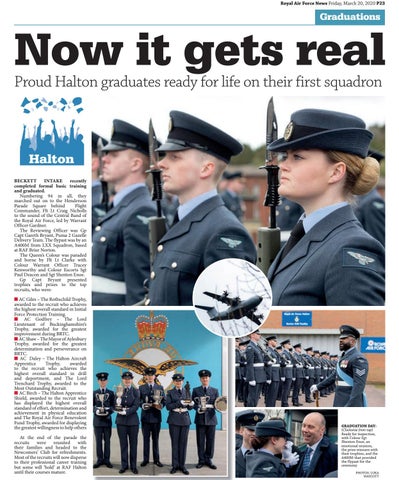 Halton BECKETT INTAKE recently completed formal basic training and graduated. Numbering 94 in all, they marched out on to the Henderson Parade Square behind Flight Commander, Flt Lt Craig Nicholls to the sound of the Central Band of the Royal Air Force, led by Warrant Officer Gardner. The Reviewing Officer was Gp Capt Gareth Bryant, Puma 2 Gazelle Delivery Team. The flypast was by an A400M from LXX Squadron, based at RAF Brize Norton. The Queen’s Colour was paraded and borne by Flt Lt Clarke with Colour Warrant Officer Tracey Kenworthy and Colour Escorts Sgt Paul Deacon and Sgt Shenton Enoe. Gp Capt Bryant presented trophies and prizes to the top recruits, who were: AC Giles – The Rothschild Trophy, awarded to the recruit who achieves the highest overall standard in Initial Force Protection Training. AC Godfrey – The Lord Lieutenant of Buckinghamshire’s Trophy, awarded for the greatest improvement during BRTC. AC Shaw – The Mayor of Aylesbury Trophy, awarded for the greatest determination and perseverance on BRTC. AC Daley – The Halton Aircraft Apprentice Trophy, awarded to the recruit who achieves the highest overall standard in drill and deportment, and The Lord Trenchard Trophy, awarded to the Most Outstanding Recruit. AC Birch – The Halton Apprentice Shield, awarded to the recruit who has displayed the highest overall standard of effort, determination and achievement in physical education and The Royal Air Force Benevolent Fund Trophy, awarded for displaying the greatest willingness to help others At the end of the parade the recruits were reunited with their families and headed to the Newcomers’ Club for refreshments. Most of the recruits will now disperse to their professional career training but some will ‘hold’ at RAF Halton until their courses mature.

GRADUATION DAY: (Clockwise from top) Ready for inspection, with Colour Sgt Shenton Enoe, an emotional reunion, the prize winners with their trophies, and the A400M that provided the flypast for the ceremony PHOTOS: LUKA WAYCOTT