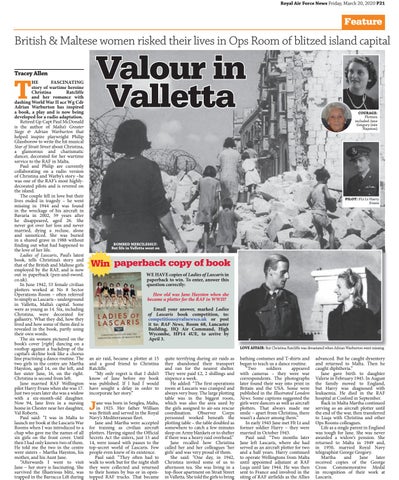 HE FASCINATING story of wartime heroine Christina Ratcliffe and her romance with dashing World War II ace Wg Cdr Adrian Warburton has inspired a book, a play and is now being developed for a radio adaptation. Retired Gp Capt Paul McDonald is the author of Malta’s Greater Siege & Adrian Warburton that helped inspire playwright Philip Glassborow to write the hit musical Star of Strait Street about Christina, a glamorous and charismatic dancer, decorated for her wartime service to the RAF in Malta. Paul and Philip are currently collaborating on a radio version of Christina and Warby’s story –he was one of the RAF’s most highlydecorated pilots and is revered on the island. The couple fell in love but their lives ended in tragedy – he went missing in 1944 and was found in the wreckage of his aircraft in Bavaria in 2002, 59 years after he disappeared, aged 26. She never got over her loss and never married, dying a recluse, alone and unnoticed. She was buried in a shared grave in 1988 without finding out what had happened to the love of her life. Ladies of Lascaris, Paul’s latest book, tells Christina’s story and that of the British and Maltese girls employed by the RAF, and is now out in paperback (pen-and-sword. co.uk). In June 1942, 53 female civilian plotters worked at No 8 Sector Operations Room – often referred to simply as Lascaris – underground in Valletta, Malta’s capital. Some were as young as 14. Six, including Christina, were decorated for gallantry. What they did, how they lived and how some of them died is revealed in the book, partly using their own words. The six women pictured on the book’s cover [right] dancing on a rooftop against a backdrop of the capital’s skyline look like a chorus line practising a dance routine. The two girls in the centre are Martha Hayston, aged 14, on the left, and her sister Jane, 16, on the right. Christina is second from left. Jane married RAF Wellington pilot Harry Evans when she was 17. Just two years later she was a widow with a six-month-old daughter. Now 94, Jane lives in a nursing home in Chester near her daughter, Val Roberts. Paul said: “I was in Malta to launch my book at the Lascaris War Rooms when I was introduced to a chap who gave me the names of all six girls on the front cover. Until then I had only known two of them. He told me the two in the centre were sisters – Martha Hayston, his mother, and his Aunt Jane. “Afterwards I went to visit Jane – her story is fascinating. She survived the Illustrious blitz, was trapped in the Barracca Lift during

BOMBED MERCILESSLY: But life in Valletta went on

Win paperback copy of book WE HAVE copies of Ladies of Lascaris in paperback to win. To enter, answer this question correctly: How old was Jane Hayston when she became a plotter for the RAF in WWII? Email your answer, marked Ladies of Lascaris book competition, to: competitions@rafnewsco.uk or post it to: RAF News, Room 68, Lancaster Building, HQ Air Command, High Wycombe, HP14 4UE, to arrive by April 3. LOVE AFFAIR: But Christina Ratcliffe was devastated when Adrian Warburton went missing

an air raid, became a plotter at 15 and a good friend to Christina Ratcliffe. “My only regret is that I didn’t know of Jane before my book was published. If I had I would have sought a delay in order to incorporate her story.”

ane was born in Senglea, Malta, in 1925. Her father William was British and served in the Royal Navy’s Mediterranean fleet. Jane and Martha were accepted for training as civilian aircraft plotters. Having signed the Official Secrets Act the sisters, just 15 and 14, were issued with passes to the top-secret world of Lascaris. Few people even knew of its existence. Paul said: “They often had to walk to work but for the night shift they were collected and returned to their homes by bus or in opentopped RAF trucks. That became

quite terrifying during air raids as they abandoned their transport and ran for the nearest shelter. They were paid £2, 2 shillings and sixpence a week. He added: “The first operations room at Lascaris was cramped and always very busy. The large plotting table was in the biggest room, which was also the area used by the girls assigned to air-sea rescue coordination. Observer Corps personnel worked beneath the plotting table – the table doubled as somewhere to catch a few minutes sleep on Army blankets or to shelter if there was a heavy raid overhead.” Jane recalled how Christina called her and her colleagues ‘her girls’ and was very proud of them. She said: “One day, in 1942, Christina invited some of us to afternoon tea. She was living in a top-floor apartment on Strait Street in Valletta. She told the girls to bring

bathing costumes and T-shirts and began to teach us a dance routine. “Two soldiers appeared with cameras – they were war correspondents. The photographs later found their way into print in Britain and the USA. Some were published in the Illustrated London News. Some captions suggested the girls were dancers as well as aircraft plotters. That always made me smile – apart from Christina, there wasn’t a dancer among them.” In early 1943 Jane met Flt Lt and former soldier Harry – they were married in October 1943. Paul said: “Two months later Jane left Lascaris, where she had served as an aircraft plotter for two and a half years. Harry continued to operate Wellingtons from Malta until appointed adjutant at RAF Luqa until late 1944. He was then sent to France and involved in the siting of RAF airfields as the Allies

advanced. But he caught dysentery and returned to Malta. Then he caught diphtheria.” Jane gave birth to daughter Valerie in February 1945. In August the family moved to England, but Harry was diagnosed with leukaemia. He died in the RAF hospital at Cosford in September. Back in Malta Martha continued serving as an aircraft plotter until the end of the war, then transferred to Luqa with Christina and other Ops Rooms colleagues. Life as a single parent in England was tough for Jane. She was never awarded a widow’s pension. She returned to Malta in 1949 and, in 1950, married Royal Navy telegraphist George Gregory. Martha and Jane later received copies of the George Cross Commemorative Medal in recognition of their work at Lascaris.