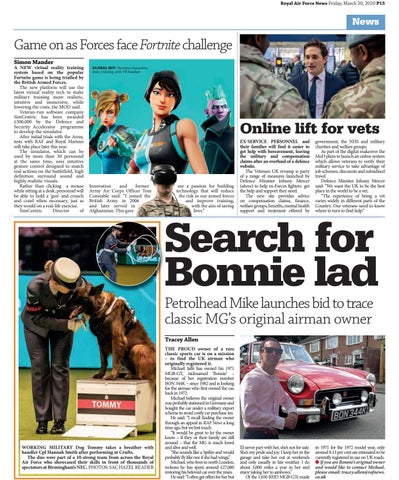 A NEW virtual reality training system based on the popular Fortnite game is being trialled by the British Armed Forces. The new platform will use the latest virtual reality tech to make military training more realistic, intuitive and immersive, while lowering the costs, the MOD said. Veteran-run software company SimCentric has been awarded £300,000 by the Defence and Security Accelerator programme to develop the simulator. After initial trials with the Army, tests with RAF and Royal Marines will take place later this year. The simulator, which can be used by more than 30 personnel at the same time, uses intuitive gesture control designed to match real actions on the battlefield, high definition surround sound and highly realistic visuals. Rather than clicking a mouse while sitting at a desk, personnel will be able to hold a ‘gun’ and crouch and crawl when necessary, just as they would on a real-life exercise. SimCentric Director of

Innovation and former Army Air Corps Officer Tom Constable said: “I joined the British Army in 2006 and later served in Afghanistan. This gave

me a passion for building technology that will reduce the risk to our armed forces and improve training, with the aim of saving lives.”

EX-SERVICE PERSONNEL and their families will find it easier to get help with bereavement, leaving the military and compensation claims after an overhaul of a defence website. The Veterans UK revamp is party of a range of measures launched by Defence Minister Johnny Mercer (above) to help ex-Forces fighters get the help and support they need. The new site provides advice on compensation claims, finance, welfare groups, benefits, mental health support and treatment offered by

government, the NHS and military charities and welfare groups. As part of the digital makeover the MoD plans to launch an online system which allows veterans to verify their military service to take advantage of job schemes, discounts and subsidised travel. Defence Minister Johnny Mercer said: “We want the UK to be the best place in the world to be a vet. “The experience of being a vet varies widely in different parts of the Country. Our veterans need to know where to turn to find help.”

WORKING MILITARY Dog Tommy takes a breather with handler Cpl Hannah Smith after performing at Crufts. The duo were part of a 10-strong team from across the Royal Air Force who showcased their skills in front of thousands of spectators at Birmingham’s NEC. PHOTOS: SAC HAZEL READER

THE PROUD owner of a rare classic sports car is on a mission – to find the UK airman who originally registered it. Michael Jaffé has owned his 1971 MGB-GT, nicknamed ‘Bonnie’ – because of her registration number BON 344K – since 1982 and is looking for the airman who first owned the car, back in 1972. Michael believes the original owner was probably stationed in Germany and bought the car under a military export scheme to avoid costly car purchase tax. He said: “I recall finding the owner through an appeal in RAF News a long time ago, but we lost touch. “It would be great to let the owner know – if they or their family are still around – that the MG is much loved and alive and well. “She sounds like a Spifire and would probably fly like one if she had wings.” Michael, who lives in north London, reckons he has spent around £27,000 restoring his beloved car over the years. He said: “I often get offers for her but

I’d never part with her, she’s not for sale. She’s my pride and joy. I keep her in the garage and take her out at weekends and only usually in fair weather. I do about 3,000 miles a year in her and enjoy taking her to airshows.” Of the 1,656 RHD MGB-GTs made

in 1971 for the 1972 model year, only around 0.13 per cent are estimated to be currently registered in use on UK roads. ● If you are Bonnie’s original owner and would like to contact Michael, please email: tracey.allen@rafnews. co.uk