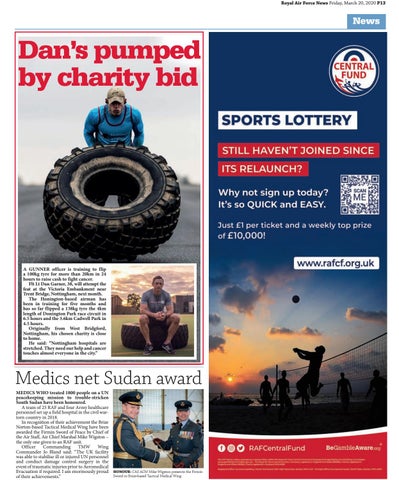 A GUNNER officer is training to flip a 100kg tyre for more than 20km in 24 hours to raise cash to fight cancer. Flt Lt Dan Garner, 38, will attempt the feat at the Victoria Embankment near Trent Bridge, Nottingham, next month. The Honington-based airman has been in training for five months and has so far flipped a 138kg tyre the 4km length of Donington Park race circuit in 6.5 hours and the 3.6km Cadwell Park in 4.5 hours. Originally from West Bridgford, Nottingham, his chosen charity is close to home. He said: “Nottingham hospitals are stretched. They need our help and cancer touches almost everyone in the city.”

Medics net Sudan award MEDICS WHO treated 1800 people on a UN peacekeeping mission to trouble-stricken South Sudan have been honoured. A team of 25 RAF and four Army healthcare personnel set up a field hospital in the civil wartorn country in 2018. In recognition of their achievement the Brize Norton-based Tactical Medical Wing have been awarded the Firmin Sword of Peace by Chief of the Air Staff, Air Chief Marshal Mike Wigston – the only one given to an RAF unit. Officer Commanding TMW Wing Commander Jo Bland said: “The UK facility was able to stabilise ill or injured UN personnel and conduct damage control surgery in the event of traumatic injuries prior to Aeromedical Evacuation if required. I am enormously proud of their achievements.”