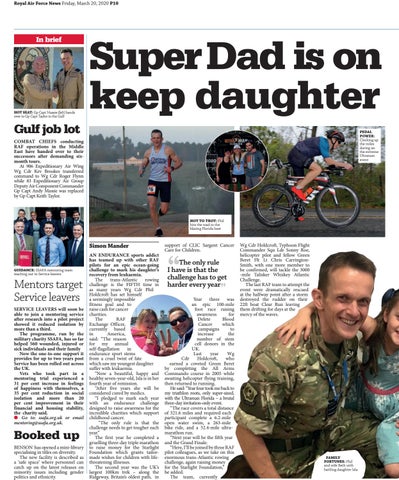 Super Dad is on keep daughter

PEDAL POWER: Clocking up the miles during an the extreme Ultraman event

HOT TO TROT: Phil hits the road in the blazing Florida heat

Mentors target Service leavers SERVICE LEAVERS will soon be able to join a mentoring service after research into a pilot project showed it reduced isolation by more than a third. The programme, run by the military charity SSAFA, has so far helped 560 wounded, injured or sick individuals and their family Now the one-to-one support it provides for up to two years post Service has been rolled out across the UK. Vets who took part in a mentoring trial experienced a 31 per cent increase in feelings of happiness with themselves, a 35 per cent reduction in social isolation and more than 20 per cent improvement in their financial and housing stability, the charity said. ● Go to: ssafa.org.uk or email mentoring@ssafa.org.uk.

Booked up BENSON has opened a mini-library specialising in titles on diversity. The new facility is described as a ‘safe space’ where personnel can catch up on the latest releases on minority issues including gender politics and ethnicity.

AN ENDURANCE sports addict has teamed up with other RAF pilots for an epic ocean-going challenge to mark his daughter’s recovery from leukaemia. The trans-Atlantic rowing challenge is the FIFTH time in as many years Wg Cdr Phil Holdcroft has set himself a seemingly impossible fitness goal and to raise cash for cancer charities. The RAF Exchange Officer, currently based in America, said: “The reason for my annual self-flagellation in endurance sport stems from a cruel twist of fate which saw my youngest daughter suffer with leukaemia. “Now a beautiful, happy and healthy seven-year-old, Isla is in her fourth year of remission. “After five years she will be considered cured by medics. “I pledged to mark each year with an endurance challenge designed to raise awareness for the incredible charities which support childhood cancer. “The only rule is that the challenge needs to get tougher each year.” The first year he completed a gruelling three-day triple marathon to raise money for the Starlight Foundation which grants tailormade wishes for children with lifethreatening illnesses. The second year was the UK’s largest 100km trek – along the Ridgeway, Britain’s oldest path, in

Year three was an epic 100-mile foot race raising awareness for Delete Blood Cancer which campaigns to increase the number of stem cell donors in the UK. Last year Wg Cdr Holdcroft, who earned a coveted Green Beret by completing the All Arms Commando course in 2005 while awaiting helicopter flying training, then returned to running. He said: “Year four took me back to my triathlon roots, only super-sized, with the Ultraman Florida – a brutal three-day invitation-only event. “The race covers a total distance of 321.6 miles and required each participant complete a 6.2-mile open water swim, a 263-mile bike ride, and a 52.4-mile ultramarathon run. “Next year will be the fifth year and the Grand Finale. “Here, I’ll be joined by three RAF pilot colleagues, as we take on this enormous trans-Atlantic rowing challenge, again raising money for the Starlight Foundation,” he added. The team, currently

Wg Cdr Holdcroft, Typhoon Flight Commander Sqn Ldr Sonny Roe, helicopter pilot and fellow Green Beret Flt Lt Chris CarringtonSmith, with one more member to be confirmed, will tackle the 3000 -mile Talisker Whiskey Atlantic Challenge. The last RAF team to attempt the event were dramatically rescued at the halfway point after a storm destroyed the rudder on their 22ft boat Clear Run leaving them drifting for days at the mercy of the waves.