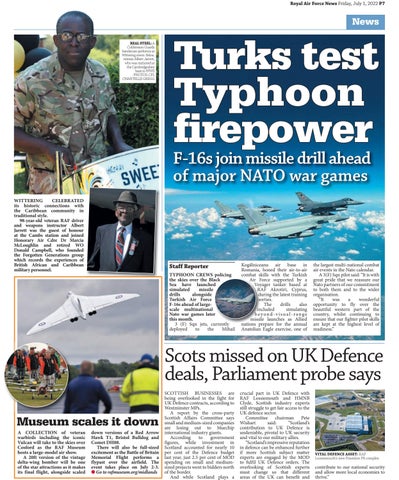 News REAL STEEL: A Coldstream Guards bandsman performs at Wittering event. Below, veteran Albert Jarrett, who was stationed at the Cambridgeshire base in WWII PHOTOS: CPL CHANTELLE GREGG

WITTERING CELEBRATED its historic connections with the Caribbean community in traditional style. 98-year-old veteran RAF driver and weapons instructor Albert Jarrett was the guest of honour at the Cambs station and joined Honorary Air Cdre Dr Marcia McLoughlin and retired WO Donald Campbell, who founded the Forgotten Generations group which records the experiences of British African and Caribbean military personnel.

Kogălniceanu air base in Romania, honed their air-to-air combat skills with the Turkish Air Force supported by a Voyager tanker based at RAF Akrotiri, Cyprus, during the latest training sorties. The drills also included simulating beyond-visual-range missile launches as Allied nations prepare for the annual Anatolian Eagle exercise, one of

the largest multi-national combat air events in the Nato calendar. A 3(F) Sqn pilot said: “It is with great pride that we reassure our Nato partners of our commitment to both them and to the wider organisation. “It was a wonderful opportunity to fly over the beautiful western part of the country, whilst continuing to ensure that our fighter pilot skills are kept at the highest level of readiness.”

Scots missed on UK Defence deals, Parliament probe says Museum scales it down A COLLECTION of veteran warbirds including the iconic Vulcan will take to the skies over Cosford as the RAF Museum hosts a large-model air show. A 20ft version of the vintage delta-wing bomber will be one of the star attractions as it makes its final flight, alongside scaled

down versions of a Red Arrow Hawk T1, Bristol Bulldog and Comet DH88. There will also be full-sized excitement as the Battle of Britain Memorial Flight performs a flypast over the airfield. The event takes place on July 2-3. Go to rafmuseum.org/midlands

SCOTTISH BUSINESSES are being overlooked in the fight for UK Defence contracts, according to Westminster MPs. A report by the cross-party Scottish Affairs Committee says small and medium-sized companies are losing out to bluechip international industry giants. According to government figures, while investment in Scotland accounted for nearly 10 per cent of the Defence budget last year, just 2.5 per cent of MOD spending on small and mediumsized projects went to bidders north of the border. And while Scotland plays a

crucial part in UK Defence with RAF Lossiemouth and HMNB Clyde, Scottish industry experts still struggle to get fair access to the UK defence sector. Committee chairman Pete Wishart said: “Scotland’s contribution to UK Defence is undeniable, pivotal to UK security and vital to our military allies. “Scotland’s impressive reputation in defence can be enhanced further if more Scottish subject matter experts are engaged by the MOD to fulfil UK Defence orders. The overlooking of Scottish experts must change so that different areas of the UK can benefit and

contribute to our national security and allow more local economies to thrive.”