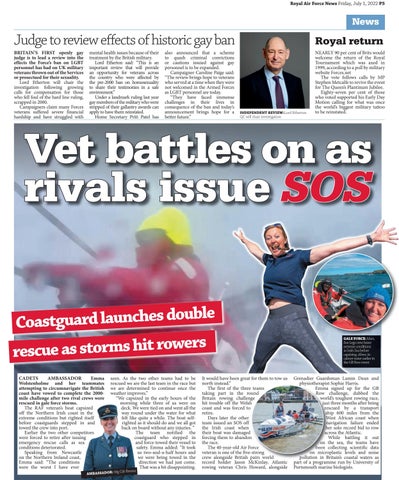 mental health issues because of their treatment by the British military. Lord Etherton said: “This is an important review that will provide an opportunity for veterans across the country who were affected by the pre-2000 ban on homosexuality to share their testimonies in a safe environment.” Under a landmark ruling last year gay members of the military who were stripped of their gallantry awards can apply to have them reinstated. Home Secretary Priti Patel has

NEARLY 90 per cent of Brits would welcome the return of the Royal Tournament which was axed in 1999, according to a poll by military website Forces.net The vote follows calls by MP Stephen Metcalfe to revive the event for The Queen’s Plantinum Jubilee. Eighty-seven per cent of those who voted supported his Early Day Motion calling for what was once the world’s biggest military tattoo to be reinstated.

BRITAIN’S FIRST openly gay judge is to lead a review into the effects the Force’s ban on LGBT personnel has had on UK military veterans thrown out of the Services or prosectued for their sexuality. Lord Etherton will chair the investigation following growing calls for compensation for those who fell foul of the hard line ruling, scrapped in 2000. Campaigners claim many Forces veterans suffered severe financial hardship and have struggled with

also announced that a scheme to quash criminal convictions or cautions issuied against gay personnel is to be expanded. Campaigner Caroline Paige said: “The review brings hope to veterans who served at a time when they were not welcomed in the Armed Forces as LGBT personnel are today. “They have faced immense challenges in their lives in consequence of the ban and today’s announcement brings hope for a better future.”

Vet battles on as rivals issue SOS le b u o d s e h c n u la d r a u Coastg s r e w o r it h s m r o t rescue as s CADETS AMBASSADOR Emma Wolstenholme and her teammates attempting to circumnavigate the British coast have vowed to complete the 2000mile challenge after two rival crews were rescued in gale force storms. The RAF veteran’s boat capsized off the Northern Irish coast in the extreme conditions but righted itself before coastguards stepped in and towed the crew into port. Earlier the two other competitors were forced to retire after issuing emergency rescue calls as sea conditions deteriorated. Speaking from Newcastle on the Northern Ireland coast, Emma said: “The conditions were the worst I have ever

seen. As the two other teams had to be rescued we are the last team in the race but we are determined to continue once the weather improves.” “We capsized in the early hours of the morning while three of us were on deck. We were tied on and went all the way round under the water for what felt like quite a while. The boat selfrighted as it should do and we all got back on board without any injuries. “ The team notified the coastguard who stepped in and force-towed their vessel to safety. Emma added: “It took us two-and-a-half hours and we were being towed in the direction we had just come. That was a bit disappointing.

It would have been great for them to tow us north instead.” The first of the three teams taking part in the round Britain rowing challenge hit trouble off the Welsh coast and was forced to retire. Days later the other team issued an SOS off the Irish coast when their boat was damaged forcing them to abandon the race. The 40-year-old Air Force veteran is one of the five-strong crew alongside British pairs world record holder Jason McKinlay, Atlantic rowing veteran Chris Howard, alongside

Grenadier Guardsman Lamin Dean and physiotherapist Sophie Harris. Emma signed up for the GB Row challenge, dubbed the world’s toughest rowing race, just three months after being rescued by a transport ship 600 miles from the West African coast when navigation failure ended her solo record bid to row across the Atlantic. While battling it out on the sea, the teams have been collecting scientific data on microplastic levels and noise pollution in Britain’s coastal waters as part of a programme run by University of Portsmouth marine biologists.