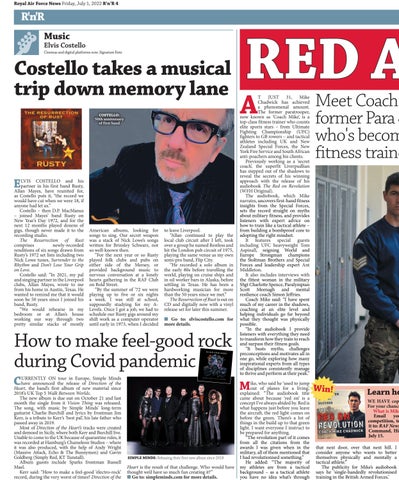 LVIS COSTELLO and his partner in his first band Rusty, Allan Mayes, have reunited for, as Costello puts it, “the record we would have cut when we were 18, if anyone had let us.” Costello – then D.P. MacManus – joined Mayes’ band Rusty on New Year’s Day 1972, and for the next 12 months played dozens of gigs, though never made it to the recording studio. The Resurrection of Rust comprises newly-recorded renditions of six songs drawn from Rusty’s 1972 set lists including two Nick Lowe tunes, Surrender to the Rhythm and Don’t Lose Your Grip on Love. Costello said: “In 2021, my pal and singing partner in the Liverpool clubs, Allan Mayes, wrote to me from his home in Austin, Texas. He wanted to remind me that it would soon be 50 years since I joined his band, Rusty. “We would rehearse in my bedroom or at Allan’s house working our way through two pretty similar stacks of mostly

American albums, looking for songs to sing. Our secret weapon was a stack of Nick Lowe’s songs written for Brinsley Schwarz, not so well‐known then. “For the next year or so Rusty played folk clubs and pubs on either side of the Mersey, or provided background music to nervous conversation at a lonely hearts gathering in the RAF Club on Bold Street. “By the summer of ’72 we were playing up to five or six nights a week. I was still at school, supposedly studying for my A‐ Levels. Once I got a job, we had to schedule our Rusty gigs around my shift work as a computer operator until early in 1973, when I decided

to leave Liverpool. “Allan continued to play the local club circuit after I left, took over a group he named Restless and hit the London pub circuit of 1975, playing the same venue as my own semi‐pro band, Flip City. “He recorded a solo album in the early 80s before travelling the world, playing on cruise ships and in oil worker bars in Alaska, before settling in Texas. He has been a hardworking musician for more than the 50 years since we met.” The Resurrection of Rust is out on CD and digitally now with a vinyl release set for later this summer. n Go to: elviscostello.com for more details.

How to make feel-good rock during Covid pandemic C

URRENTLY ON tour in Europe, Simple Minds have announced the release of Direction of the Heart, the band’s first album of new material since 2018’s UK Top 5 Walk Between Worlds. The new album is due out on October 21 and last month the single from it Vision Thing was released. The song, with music by Simple Minds’ long-term guitarist Charlie Burchill and lyrics by frontman Jim Kerr, is a tribute to Kerr’s ‘best pal’, his late father who passed away in 2019. Most of Direction of the Heart’s tracks were created and demoed in Sicily, where both Kerr and Burchill live. Unable to come to the UK because of quarantine rules, it was recorded at Hamburg’s Chameleon Studios – where it was also produced, with the help of Andy Wright (Massive Attack, Echo &amp; The Bunnymen) and Gavin Goldberg (Simply Red, KT Tunstall). Album guests include Sparks frontman Russell Mael. Kerr said: “How to make a feel-good ‘electro-rock’ record, during the very worst of times? Direction of the

Heart is the result of that challenge. Who would have thought we’d have so much fun creating it?” n Go to: simpleminds.com for more details.

T JUST 31, Mike Chadwick has achieved a phenomenal amount. The former paratrooper, now known as ‘Coach Mike’, is a top-class fitness trainer who counts elite sports stars – from Ultimate Fighting Championship (UFC) fighters to GB rowers – and tactical athletes including UK and New Zealand Special Forces, the New York Fire Service and South African anti-poachers among his clients. Previously working as a ‘secret coach’, the superfit Liverpudlian has stepped out of the shadows to reveal the secrets of his winning approach with the release of his audiobook The Red on Revolution (WFH Original). The audiobook, which Mike narrates, uncovers first-hand fitness insights from the Special Forces, sets the record straight on myths about military fitness, and provides listeners with expert advice on how to train like a tactical athlete – from building a bombproof core to adopting the right mindset. It features special guests including UFC heavyweight Tom Aspinall, reigning World and Europe Strongman champions the Stoltman Brothers and Special Forces and leadership expert Ant Middleton. It also includes interviews with the fittest woman in the military SSgt Charlotte Spence, Paralympian Scott Meenagh and mental resilience coach Simon Jeffries. Coach Mike said: “I have spent much of my career in the shadows, coaching at an elite level and helping individuals go far beyond what they thought was physically possible. “In the audiobook I provide listeners with everything they need to transform how they train to reach and surpass their fitness goals. “It busts myths, challenges preconceptions and motivates all in one go, while exploring how many inspirational experts from all types of disciplines consistently manage to thrive and perform at their peak.” ike, who said he ‘used to jump out of planes for a living’, explained: “The audiobook title came about because ‘red on’ is a concept I’ve always abided by. Red is what happens just before you leave the aircraft, the red light comes on before the green. There’s a lot of things in the build up to that green light. I want everyone I instruct to be prepared for anything. “The revolution part of it comes from all the citations from the awards I was given when in the military, all of them mentioned that I had revolutionised something.” He added: “The majority of my athletes are HEADLINERS: from a tactical Proclaimers background – as The a tactical athlete you have no idea what’s through

WE HAVE cop For your chance What is Mike Email you competition, to it to: RAF News Command, Hi July 15.

that next door, over that next hill. I consider anyone who wants to better themselves physically and mentally a tactical athlete.” The publicity for Mike’s audiobook says he ‘single-handedly revolutionised training in the British Armed Forces.’