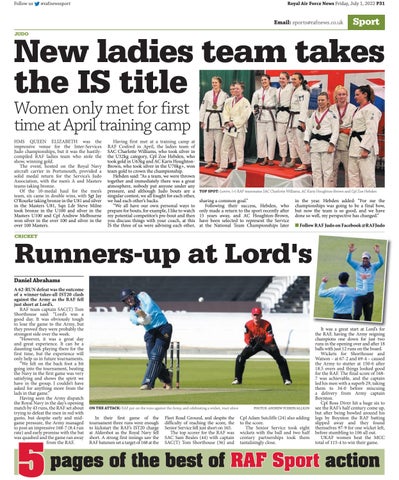 Women only met for first time at April training camp HMS QUEEN ELIZABETH was the impressive venue for the Inter-Services Judo championships, but it was the hastilycompiled RAF ladies team who stole the show, winning gold. The event, hosted on the Royal Navy aircraft carrier in Portsmouth, provided a solid medal return for the Service’s Judo Association, with the men’s A and Masters teams taking bronze. Of the 10-medal haul for the men’s team, six came in double wins, with Sgt Jay O’Rourke taking bronze in the U81 and silver in the Masters U81, Sqn Ldr Steve Milne took bronze in the U100 and silver in the Masters U100 and Cpl Andrew Melbourne won silver in the over 100 and silver in the over 100 Masters.

Having first met at a training camp at RAF Cosford in April, the ladies team of SAC Charlotte Williams, who took silver in the U52kg category, Cpl Zoe Hebden, who took gold in U63kg and AC Karis HoughtonBrown, who took silver in the U70kg+, won team gold to crown the championship. Hebden said: “As a team, we were thrown together and immediately there was a great atmosphere, nobody put anyone under any pressure, and although Judo bouts are a singular contest, we all fought for each other, we had each other’s backs. “We all have our own personal ways to prepare for bouts, for example, I like to watch my potential competitor’s pre-bout and then you discuss things with your coach, at this IS the three of us were advising each other,

sharing a common goal.” Following their success, Hebden, who only made a return to the sport recently after 15 years away, and AC Houghton-Brown, have been selected to represent the Service at the National Team Championships later

in the year. Hebden added: “For me the championships was going to be a final bow, but now the team is so good, and we have done so well, my perspective has changed.” n Follow RAF Judo on Facebook @RAFJudo

Runners-up at Lord&#39;s Daniel Abrahams A 62-RUN defeat was the outcome of a winner-takes-all IST20 clash against the Army as the RAF fell just short at Lord’s. RAF team captain SAC(T) Tom Shorthouse said: “Lord’s was a good day. It was obviously tough to lose the game to the Army, but they proved they were probably the strongest side over the week. “However, it was a great day and great experience. It can be a daunting task playing there for the first time, but the experience will only help us in future tournaments. “We felt on the back foot a bit going into the tournament, beating the Navy in the first game was very satisfying and shows the spirit we have in the group. I couldn’t have asked for anything more from the lads in that game.” Having seen the Army dispatch the Royal Navy in the day’s opening match by 43 runs, the RAF set about trying to defeat the men in red with gusto, but despite early and midgame pressure, the Army managed to post an impressive 168-7 (8.4 run rate) and early promise with the bat was quashed and the game ran away from the RAF.

ON THE ATTACK: RAF put on the runs against the Army, and celebrating a wicket, inset above

In their first game of the tournament three runs were enough to kickstart the RAF’s IST20 charge at Aldershot as the Royal Navy fell short. A strong first innings saw the RAF batsmen set a target of 168 at the

Fleet Road Ground, and despite the difficulty of reaching the score, the Senior Service fell just short on 165. The top scorer for the RAF was SAC Sam Beales (44) with captain SAC(T) Tom Shorthouse (36) and

Cpl Adam Sutcliffe (24) also adding to the score. The Senior Service took eight wickets with the ball and two half century partnerships took them tantalisingly close.

It was a great start at Lord’s for the RAF, having the Army reigning champions one down for just two runs in the opening over and after 18 balls with just 12 runs on the board. Wickets for Shorthouse and Watson – at 67-2 and 69-4 – caused the Army to stutter at 150-6 after 18.5 overs and things looked good for the RAF. The final score of 1687 was achievable, and the captain led his men with a superb 29, taking them to 34-0 before miscuing a delivery from Army captain Boynton. Cpl Ross Diver hit a huge six to see the RAF’s half century come up, but after being bowled around his legs by Boynton the RAF batting slipped away and they found themselves 97-9 for one wicket left, before stumbling to 106 all out. UKAF women beat the MCC total of 115-4 to win their game.

pages of the best of RAF Sport action