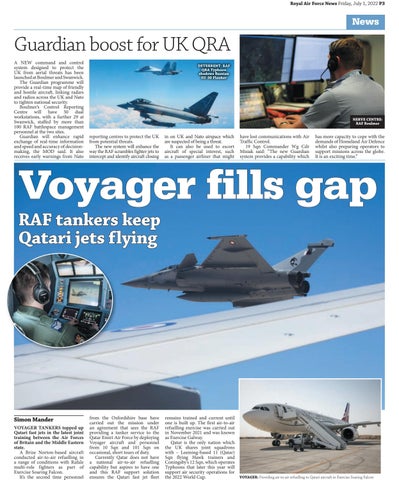 Guardian boost for UK QRA A NEW command and control system designed to protect the UK from aerial threats has been launched at Boulmer and Swanwick. The Guardian programme will provide a real-time map of friendly and hostile aircraft, linking radars and radios across the UK and Nato to tighten national security. Boulmer’s Control Reporting Centre will have 50 dual workstations, with a further 29 at Swanwick, staffed by more than 100 RAF battlespace management personnel at the two sites. Guardian will enhance rapid exchange of real-time information and speed and accuracy of decisionmaking, the MOD said. It also receives early warnings from Nato

reporting centres to protect the UK from potential threats. The new system will enhance the way the RAF scrambles fighter jets to intercept and identify aircraft closing

in on UK and Nato airspace which are suspected of being a threat. It can also be used to escort aircraft of special interest, such as a passenger airliner that might

has more capacity to cope with the demands of Homeland Air Defence whilst also preparing operators to support missions across the globe. It is an exciting time.”

remains trained and current until one is built up. The first air-to-air refuelling exercise was carried out in November 2021 and was known as Exercise Galway. Qatar is the only nation which the UK shares joint squadrons with – Leeming-based 11 (Qatar) Sqn flying Hawk trainers and Coningsby’s 12 Sqn, which operates Typhoons that later this year will support air security operations for the 2022 World Cup.

Simon Mander VOYAGER TANKERS topped up Qatari fast jets in the latest joint training between the Air Forces of Britain and the Middle Eastern state. A Brize Norton-based aircraft conducted air-to-air refuelling in a range of conditions with Rafale multi-role fighters as part of Exercise Soaring Falcon. It’s the second time personnel

from the Oxfordshire base have carried out the mission under an agreement that sees the RAF providing a tanker service to the Qatar Emiri Air Force by deploying Voyager aircraft and personnel from 10 Sqn and 101 Sqn on occasional, short tours of duty. Currently Qatar does not have a national air-to-air refuelling capability but aspires to have one and this RAF support solution ensures the Qatari fast jet fleet