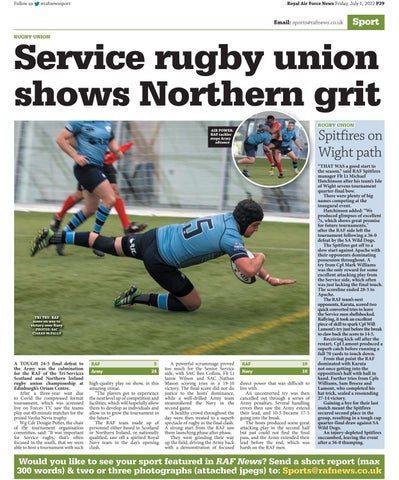 A TOUGH 24-5 final defeat to the Army was the culmination for the RAF of the Tri-Services Scotland and Northern Ireland rugby union championship at Edinburgh’s Oriam Centre. After a three-year wait due to Covid the compressed format tournament, which was screened live on Forces TV, saw the teams play out 40-minute matches for the prized Veolia Nevis trophy. Wg Cdr Dougie Potter, the chair of the tournament organisation committee, said: “It was important for Service rugby, that’s often focused in the south, that we were able to host a tournament with such

high-quality play on show, in this amazing venue. “The players got to experience the next level up of competition and facilities, which will hopefully allow them to develop as individuals and allow us to grow the tournament in the future.” The RAF team made up of personnel either based in Scotland or Northern Ireland, or nationally qualified, saw off a spirited Royal Navy team in the day’s opening clash.

A powerful scrummage proved too much for the Senior Service side, with SAC Ben Collins, Flt Lt Jamie Wilson and SAC Nathan Mason scoring tries in a 19-10 victory. The final score did not do justice to the hosts’ dominance, while a well-drilled Army team steamrollered the Navy in the second game. A healthy crowd throughout the day were then treated to a superb spectacle of rugby in the final clash. A strong start from the RAF saw them launching phase after phase. They were grinding their way up the field, driving the Army back with a demonstration of focused

direct power that was difficult to live with. An unconverted try was then cancelled out through a series of Army penalties. Several handling errors then saw the Army extend their lead, and 10-5 became 17-5 going into the break. The hosts produced some great attacking play in the second half but just could not find the final pass, and the Army extended their lead before the end, which was harsh on the RAF men.

“THAT WAS a good start to the season,” said RAF Spitfires manager Flt Lt Michael Hutchinson after his team’s Isle of Wight sevens tournament quarter-final bow. There were plenty of big names competing at the inaugural event. Hutchinson added: “We produced glimpses of excellent 7s, which shows great promise for future tournaments,” after the RAF side left the tournament following a 36-0 defeat by the SA Wild Dogs. The Spitfires got off to a slow start against Apache with their opponents dominating possession throughout. A try from Cpl Mark Williams was the only reward for some excellent attacking play from the Service side, which often was just lacking the final touch. The scoreline ended 28-5 to Apache. The RAF team’s next opponents, Karuta, scored two quick converted tries to leave the Service men shellshocked. Rallying, it took an excellent piece of skill to spark Cpl Will Lamont’s try just before the break to claw back the score to 14-5. Receiving kick-off after the restart, Cpl Lamont produced a superb catch before running a full 70 yards to touch down. From that point the RAF dominated with Karuta not once getting into the opposition’s half with ball in hand. Further tries from Cpls Williams, Sam Breeze and Lamont, who completed his hat trick, sealed a resounding 27-14 victory. Gaining a bye for their last match meant the Spitfires secured second place in the group, resulting in a tough cup quarter-final draw against SA Wild Dogs. An injury-depleted Spitfires succumbed, leaving the event after a 36-0 thumping.