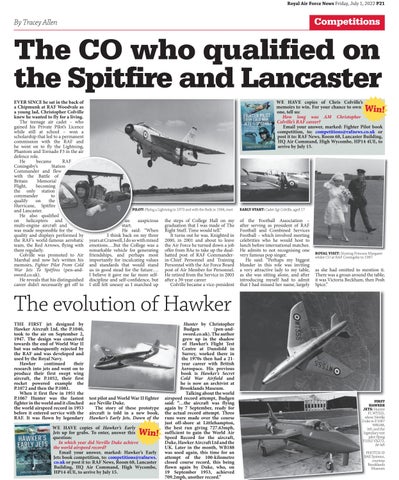 The CO who qualified on the Spitfire and Lancaster EVER SINCE he sat in the back of a Chipmunk at RAF Woodvale as a young lad, Christopher Colville knew he wanted to fly for a living. The teenage air cadet – who gained his Private Pilot’s Licence while still at school – won a scholarship that led to a permanent commission with the RAF and he went on to fly the Lightning, Phantom and Tornado F3 in the air defence role. He became RAF Coningsby’s Station Commander and flew with the Battle of Britain Memorial Flight, becoming the only station commander to qualify on the Hurricane, Spitfire and Lancaster. He also qualified on helicopters and multi-engine aircraft and was made responsible for the quality and displays performed by the RAF’s world-famous aerobatic team, the Red Arrows, flying with them regularly. Colville was promoted to Air Marshal and now he’s written his memoirs, Fighter Pilot From Cold War Jets To Spitfires (pen-andsword.co.uk). He reveals that his distinguished career didn’t necessarily get off to

WE HAVE copies of Chris Colville’s memoirs to win. For your chance to own one, tell us: How long was AM Christopher Colville’s RAF career? Email your answer, marked: Fighter Pilot book competition, to: competitions@rafnews.co.uk or post it to: RAF News, Room 68, Lancaster Building, HQ Air Command, High Wycombe, HP14 4UE, to arrive by July 15.

an auspicious start. He said: “When I think back on my three years at Cranwell, I do so with mixed emotions….But the College was a remarkable vehicle for generating friendships, and perhaps most importantly for inculcating values and standards that would stand us in good stead for the future…. I believe it gave me far more selfdiscipline and self-confidence, but I still felt uneasy as I marched up

the steps of College Hall on my graduation that I was made of The Right Stuff. Time would tell.” It turns out he was. Knighted in 2000, in 2001 and about to leave the Air Force he turned down a job offer from BAe to take up the dualhatted post of RAF Commanderin-Chief Personnel and Training Personnel with the Air Force Board post of Air Member for Personnel. He retired from the Service in 2003 after a 39-year career Colville became a vice-president

of the Football Association – after serving as president of RAF Football and Combined Services Football – which involved meeting celebrities who he would host to lunch before international matches. He admits to not recognising one very famous pop singer. He said: “Perhaps my biggest blunder in this role was inviting a very attractive lady to my table, as she was sitting alone, and after introducing myself had to admit that I had missed her name, largely

as she had omitted to mention it. There was a groan around the table; it was Victoria Beckham, then Posh Spice.”

The evolution of Hawker THE FIRST jet designed by Hawker Aircraft Ltd, the P.1040, took to the air on September 2, 1947. The design was conceived towards the end of World War II but was subsequently rejected by the RAF and was developed and used by the Royal Navy. Hawker continued their research into jets and went on to produce their first swept wing aircraft, the P.1052, their first rocket powered example the P.1072 and then the P.1081. When it first flew in 1951 the P.1067 Hunter was the fastest fighter in the world and it clinched the world airspeed record in 1953 before it entered service with the RAF. It was flown by legendary

test pilot and World War II fighter ace Neville Duke. The story of these prototype aircraft is told in a new book, Hawker’s Early Jets, Dawn of the

WE HAVE copies of Hawker’s Early Jets up for grabs. To enter, answer this question: In which year did Neville Duke achieve the world airspeed record? Email your answer, marked: Hawker’s Early Jets book competition, to: competitions@rafnews. co.uk or post it to: RAF News, Room 68, Lancaster Building, HQ Air Command, High Wycombe, HP14 4UE, to arrive by July 15.

Hunter by Christopher Budgen (pen-andsword.co.uk). The author grew up in the shadow of Hawker’s Flight Test Centre at Dunsfold in Surrey, worked there in the 1970s then had a 21year career with British Aerospace. His previous book is Hawker’s Secret Cold War Airfield and he is now an archivist at Brooklands Museum. Talking about the world airspeed record attempt, Budgen said: “…the aircraft was flying again by 7 September, ready for the actual record attempt. Three runs were made over the course just off-shore at Littlehampton, the best run giving 727.63mph, sufficient to gain the World Air Speed Record for the aircraft, Duke, Hawker Aircraft Ltd and the UK. Later in the month, WB188 was used again, this time for an attempt of the 100-kilometre closed course record, this being flown again by Duke, who, on 19 September 1953, achieved 709.2mph, another record.”