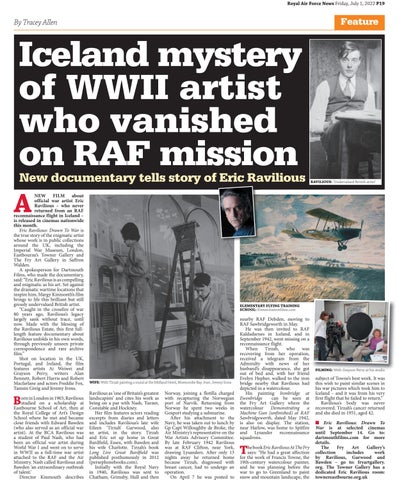 Iceland mystery of WWII artist who vanished on RAF mission

NEW FILM about official war artist Eric Ravilious – who never returned from an RAF reconnaissance flight in Iceland – is released in cinemas nationwide this month. Eric Ravilious: Drawn To War is the true story of the enigmatic artist whose work is in public collections around the UK, including the Imperial War Museum, London, Eastbourne’s Towner Gallery and The Fry Art Gallery in Saffron Walden. A spokesperson for Dartmouth Films, who made the documentary, said: “Eric Ravilious is as compelling and enigmatic as his art. Set against the dramatic wartime locations that inspire him, Margy Kinmonth’s film brings to life this brilliant but still grossly undervalued British artist. “Caught in the crossfire of war 80 years ago, Ravilious’s legacy largely sank without trace, until now. Made with the blessing of the Ravilious Estate, this first fulllength feature documentary about Ravilious unfolds in his own words, through previously unseen private correspondence and rare archive film.” Shot on location in the UK, Portugal, and Ireland, the film features artists Ai Weiwei and Grayson Perry, writers Alan Bennett, Robert Harris and Robert Macfarlane and actors Freddie Fox, Tamsin Greig and Jeremy Irons.

orn in London in 1903, Ravilious studied on a scholarship at Eastbourne School of Art, then at the Royal College of Art’s Design School where he met and became close friends with Edward Bawden (who also served as an official war artist). At the RCA Ravilious was a student of Paul Nash, who had been an official war artist during World War I and went on to serve in WWII as a full-time war artist attached to the RAF and the Air Ministry. Nash called Ravilious and Bawden ‘an extraordinary outbreak of talent.’ Director Kinmouth describes

Ravilious as ‘one of Britain’s greatest landscapists’ and cites his work as being on a par with Nash, Turner, Constable and Hockney. Her film features actors reading excerpts from diaries and letters and includes Ravilious’s late wife Eileen ‘Tirzah’ Garwood, also an artist, in the story. Tirzah and Eric set up home in Great Bardfield, Essex, with Bawden and his wife Charlotte. Tirzah’s book Long Live Great Bardfield was published posthumously in 2012 (persephonebooks.com). Initially with the Royal Navy in 1940, Ravilious was sent to Chatham, Grimsby, Hull and then

Norway, joining a flotilla charged with recapturing the Norwegian port of Narvik. Returning from Norway he spent two weeks in Gosport studying a submarine. After his attachment to the Navy, he was taken out to lunch by Gp Capt Willoughby de Broke, the Air Ministry’s representative on the War Artists Advisory Committee. By late February 1942 Ravilious was at RAF Clifton, near York, drawing Lysanders. After only 13 nights away he returned home because Tirzah, diagnosed with breast cancer, had to undergo an operation. On April 7 he was posted to

nearby RAF Debden, moving to RAF Sawbridgeworth in May. He was then invited to RAF Kaldadarnes in Iceland, and in September 1942, went missing on a reconnaissance flight. When Tirzah, who was recovering from her operation, received a telegram from the Admiralty with news of her husband’s disappearance, she got out of bed and, with her friend Evelyn Hepher, walked to the iron bridge nearby that Ravilious had depicted in a watercolour. His painting Ironbridge at Ewenbridge can be seen at the Fry Art Gallery where the watercolour Demonstrating a Machine Gun (unfinished) at RAF Sawbridgeworth, dated May 1942, is also on display. The station, near Harlow, was home to Spitfire and Lysander reconnaissance squadrons.

he book Eric Ravilious At The Fry says: “He had a great affection for the work of Francis Towne, the 19th-century watercolour painter, and he was planning before the war to go to Greenland to paint snow and mountain landscape, the

FILMING: With Grayson Perry at his studio

subject of Towne’s best work. It was this wish to paint similar scenes in his war pictures which took him to Iceland – and it was from his very first flight that he failed to return.” Ravilious’s body was never recovered. Tirzah’s cancer returned and she died in 1951, aged 42. n Eric Ravilious: Drawn To War is at selected cinemas until September 14. Go to: dartmouthfilms.com for more details. The Fry Art Gallery’s collection includes work by Ravilious, Garwood and Bawden – go to: fryartgallery. org. The Towner Gallery has a dedicated Eric Ravilious room: townereastbourne.org.uk