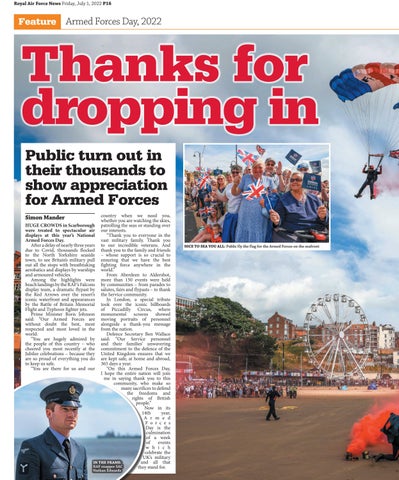 Thanks for dropping in Public turn out in their thousands to show appreciation for Armed Forces country when we need you, whether you are watching the skies, HUGE CROWDS in Scarborough patrolling the seas or standing over were treated to spectacular air our interests. displays at this year’s National “Thank you to everyone in the Armed Forces Day. vast military family. Thank you After a delay of nearly three years to our incredible veterans. And due to Covid, thousands flocked thank you to the family and friends to the North Yorkshire seaside – whose support is so crucial to town, to see Britain’s military pull ensuring that we have the best out all the stops with breathtaking fighting force anywhere in the aerobatics and displays by warships world.” and armoured vehicles. From Aberdeen to Aldershot, Among the highlights were more than 150 events were held beach landings by the RAF’s Falcons by communities – from parades to display team, a dramatic flypast by salutes, fairs and flypasts – to thank the Red Arrows over the resort’s the Service community. iconic waterfront and appearances In London, a special tribute by the Battle of Britain Memorial took over the iconic billboards Flight and Typhoon fighter jets. of Piccadilly Circus, where Prime Minister Boris Johnson monumental screens showed said: “Our Armed Forces are moving portraits of personnel without doubt the best, most alongside a thank-you message respected and most loved in the from the nation. world. Defence Secretary Ben Wallace “You are hugely admired by said: “Our Service personnel the people of this country – who and their families’ unwavering cheered you most recently at the commitment to the defence of the Jubilee celebrations – because they United Kingdom ensures that we are so proud of everything you do are kept safe, at home and abroad, to keep us safe. 365 days a year. “You are there for us and our “On this Armed Forces Day, I hope the entire nation will join me in saying thank you to this community, who make so many sacrifices to defend the freedoms and rights of British people.” Now in its 14th year, A r m e d F o r c e s Day is the culmination of a week of events w h i c h celebrate the UK’s military IN THE FRAME: and all that RAF snapper SAC they stand for.

NICE TO SEA YOU ALL: Public fly the flag for the Armed Forces on the seafront