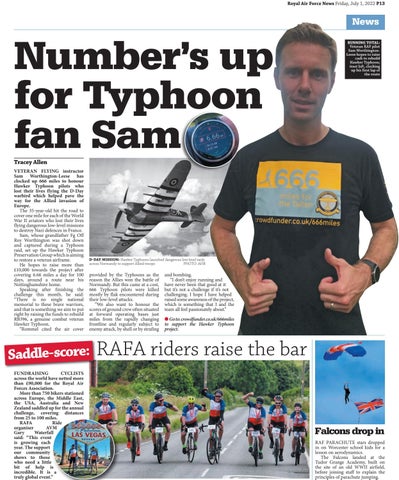 Number’s up for Typhoon fan Sam

Tracey Allen VETERAN FLYING instructor Sam Worthington-Leese has clocked up 666 miles to honour Hawker Typhoon pilots who lost their lives flying the D-Day warbird which helped pave the way for the Allied invasion of Europe. The 35-year-old hit the road to cover one mile for each of the World War II aviators who lost their lives flying dangerous low-level missions to destroy Nazi defences in France. Sam, whose grandfather Fg Off Roy Worthington was shot down and captured during a Typhoon raid, set up the Hawker Typhoon Preservation Group which is aiming to restore a veteran airframe. He hopes to raise more than £10,000 towards the project after covering 6.66 miles a day for 100 days, around a route near his Nottinghamshire home. Speaking after finishing the challenge this month, he said: “There is no single national memorial to these brave warriors, and that is something we aim to put right by raising the funds to rebuild RB396, a genuine combat veteran Hawker Typhoon. “Rommel cited the air cover

provided by the Typhoons as the reason the Allies won the battle of Normandy. But this came at a cost, 666 Typhoon pilots were killed mostly by flak encountered during their low-level attacks. “We also want to honour the scores of ground crew often situated at forward operating bases just miles from the rapidly changing frontline and regularly subject to enemy attack, by shell or by strafing

Saddle-score: FUNDRAISING CYCLISTS across the world have netted more than £90,000 for the Royal Air Forces Association. More than 750 bikers stationed across Europe, the Middle East, the USA, Australia and New Zealand saddled up for the annual challenge, covering distances from 25 to 100 miles. RAFA Ride organiser AVM Gary Waterfall said: “This event is growing each year. The support our community shows to those who need a little bit of help is incredible. It is a truly global event.”

and bombing. “I don’t enjoy running and have never been that good at it but it’s not a challenge if it’s not challenging. I hope I have helped raised some awareness of the project, which is something that I and the team all feel passionately about.” Go to: crowdfunder.co.uk/666miles to support the Hawker Typhoon project.

Falcons drop in RAF PARACHUTE stars dropped in on Worcester school kids for a lesson on aerodynamics. The Falcons landed at the Tudor Grange Academy, built on the site of an old WWII airfield, before joining staff to explain the principles of parachute jumping.