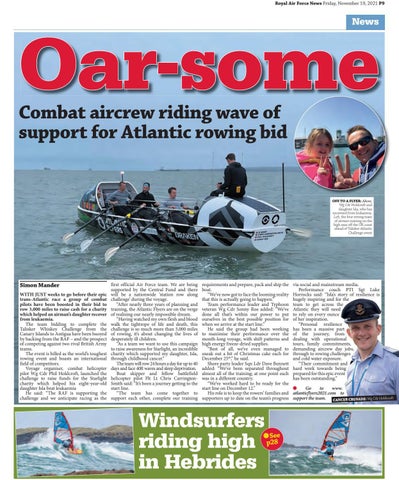 OFF TO A FLYER: Above, Wg Cdr Holdcroft and daughter Isla, who has recovered from leukaemia. Left, the four-strong team of airmen training on the high seas off the UK coast ahead of Talisker Atlantic Challenge event

Simon Mander WITH JUST weeks to go before their epic trans-Atlantic race a group of combat pilots have been boosted in their bid to row 3,000 miles to raise cash for a charity which helped an airman’s daughter recover from leukaemia. The team bidding to complete the Talisker Whiskey Challenge from the Canary Islands to Antigua have been buoyed by backing from the RAF – and the prospect of competing against two rival British Army teams. The event is billed as the world’s toughest rowing event and boasts an international field of competitors. Voyage organiser, combat helicopter pilot Wg Cdr Phil Holdcroft, launched the challenge to raise funds for the Starlight charity which helped his eight-year-old daughter Isla beat leukaemia He said: “The RAF is supporting the challenge and we anticipate racing as the

first official Air Force team. We are being supported by the Central Fund and there will be a nationwide ‘station row along challenge’ during the voyage. “After nearly three years of planning and training, the Atlantic Flyers are on the verge of realising our nearly impossible dream. “Having watched my own flesh and blood walk the tightrope of life and death, this challenge is so much more than 3,000 miles of rowing, it’s about changing the lives of desperately ill children. “As a team we want to use this campaign to raise awareness for Starlight, an incredible charity which supported my daughter, Isla, through childhood cancer.” The team will row 24 hours a day for up to 40 days and face 40ft waves and sleep deprivation. Boat skipper and fellow battlefield helicopter pilot Flt Lt Chris CarringtonSmith said: “It’s been a journey getting to the start line. “The team has come together to support each other, complete our training

requirements and prepare, pack and ship the boat. “We’ve now got to face the looming reality that this is actually going to happen.” Team performance leader and Typhoon veteran Wg Cdr Sonny Roe added: “We’ve done all that’s within our power to put ourselves in the best possible position for when we arrive at the start line.” He said the group had been working to maximise their performance over the month-long voyage, with shift patterns and high energy freeze-dried supplies. “Best of all, we’ve even managed to sneak out a bit of Christmas cake each for December 25th,” he said. Shore party leader Sqn Ldr Dave Bennett added: “We’ve been separated throughout almost all of the training; at one point each was in a different country. “We’ve worked hard to be ready for the start line on December 12.” His role is to keep the rowers’ families and supporters up to date on the team’s progress

via social and mainstream media. Performance coach PTI Sgt Luke Horrocks said: “Isla’s story of resilience is hugely inspiring and for the team to get across the Atlantic they will need to rely on every ounce of her inspiration. “Personal resilience has been a massive part of the journey, from dealing with operational tours, family commitments, demanding aircrew day jobs, through to rowing challenges and cold water exposure. “Their commitment and hard work towards being prepared for this epic event has been outstanding.” ● Go to www. atlanticflyers2021.com to support the team. CANCER CRUSADE: Wg Cdr Holdcroft