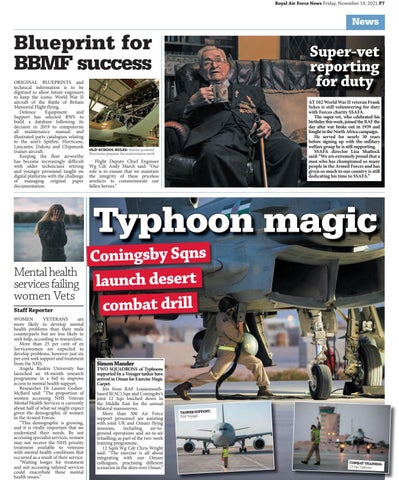 Blueprint for BBMF success ORIGINAL BLUEPRINTS and technical information is to be digitised to allow future engineers to keep the iconic World War II aircraft of the Battle of Britain Memorial Flight flying. Defence Equipment and Support has selected RWS to build a database following its decision in 2019 to computerise all maintenance manual and illustrated parts catalogues relating to the unit’s Spitfire, Hurricane, Lancaster, Dakota and Chipmunk trainer aircraft. Keeping the fleet airworthy has become increasingly difficult with older technicians retiring and younger personnel taught on digital platforms with the challenge of managing original paper documentation.

Super-vet reporting for duty AT 102 World War II veteran Frank Sykes is still volunteering for duty with Forces charity SSAFA. The super-vet, who celebrated his birthday this week, joined the RAF the day after war broke out in 1939 and fought in the North Africa campaign. He served for nearly 30 years before signing up with the military welfare group he is still supporting. SSAFA director Lisa Shattock said: “We are extremely proud that a man who has championed so many people in the Armed Forces and has given so much to our country is still dedicating his time to SSAFA.”

Flight Deputy Chief Engineer Wg Cdr Andy March said: “Our role is to ensure that we maintain the integrity of these priceless artefacts to commemorate our fallen heroes.”

Typhoon magic Mental health services failing women Vets Staff Reporter WOMEN VETERANS are more likely to develop mental health problems than their male counterparts but are less likely to seek help, according to researchers. More than 25 per cent of ex Servicewomen are expected to develop problems, however just six per cent seek support and treatment from the NHS. Angela Ruskin University has launched an 18-month research programme in a bid to improve access to mental health support. Researcher Dr Lauren GodierMcBard said: “The proportion of women accessing NHS Veteran Mental Health Services is currently about half of what we might expect given the demographic of women in the Armed Forces. “This demographic is growing, and it is vitally important that we understand their needs. By not accessing specialist services, women may not receive the NHS priority treatment available to veterans with mental health conditions that occurred as a result of their service. “Waiting longer for treatment and not accessing tailored services could exacerbate these mental health issues.”

TWO SQUADRONS of Typhoons supported by a Voyager tanker have arrived in Oman for Exercise Magic Carpet. Jets from RAF Lossiemouthbased II(AC) Sqn and Coningsby’s joint 12 Sqn touched down in the Middle East for the annual bilateral manoeuvres. More than 300 Air Force support personnel are assisting with joint UK and Omani flying missions, including air-toground operations and air-to-air refuelling, as part of the two-week training programme. 12 Sqn’s Wg Cdr Chris Wright said: “The exercise is all about integrating with our Omani colleagues, practising different scenarios in the skies over Oman.”