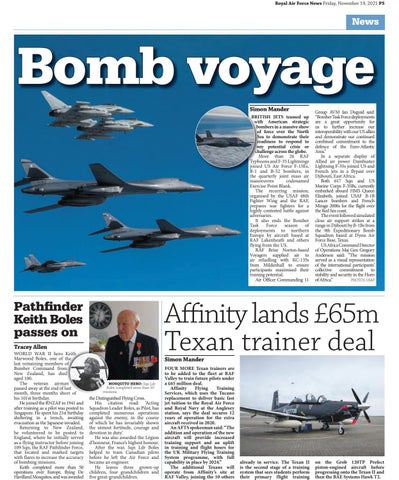 Bomb voyage Simon Mander BRITISH JETS teamed up with American strategic bombers in a massive show of force over the North Sea to demonstrate their readiness to respond to any potential crisis or challenge across the globe. More than 26 RAF Typhoons and F-35 Lightnings joined US Air Force F-15Es, B-1 and B-52 bombers, in the quarterly joint mass air manoeuvres codenamed Exercise Point Blank. The recurring mission, organised by the USAF 48th Fighter Wing and the RAF, prepares war fighters for a highly contested battle against adversaries. It also ends the Bomber Task Force season of deployments to northern Europe by aircraft based at RAF Lakenheath and others flying from the US. RAF Brize Norton-based Voyagers supplied air to air refuelling with KC-135s from Mildenhall to ensure participants maximised their training potential. Air Officer Commanding 11

WORLD WAR II hero Keith Marwood Boles, one of the last remaining members of Bomber Command from New Zealand, has died aged 100. The veteran airman passed away at the end of last month, three months short of his 101st birthday. He joined the RNZAF in 1941 and after training as a pilot was posted to Singapore. He spent his 21st birthday sheltering in a trench, awaiting evacuation as the Japanese invaded. Returning to New Zealand, he volunteered to be posted to England, where he initially served as a flying instructor before joining 109 Sqn, the RAF Pathfinder Force, that located and marked targets with flares to increase the accuracy of bombing missions. Keith completed more than 50 operations over Europe, flying De Havilland Mosquitos, and was awarded

Group AVM Ian Duguid said: “Bomber Task Force deployments are a great opportunity for us to further increase our interoperability with our US allies and demonstrate our continued combined commitment to the defence of the Euro-Atlantic Area.” In a separate display of Allied air power Dambuster Lightning F-35s joined US and French jets in a flypast over Djibouti, East Africa. Both 617 Sqn and US Marine Corps F-35Bs, currently embarked aboard HMS Queen Elizabeth, joined USAF B-1B Lancer bombers and French Mirage 2000s for the flight over the Red Sea coast. The event followed simulated close air support strikes at a range in Djibouti by B-1Bs from the 9th Expeditionary Bomb Squadron based at Dyess Air Force Base, Texas. US Africa Command Director of Operations Maj Gen Gregory Anderson said: “The mission served as a visual representation of the international participants’ collective commitment to stability and security in the Horn of Africa.” PHOTOS: USAF

the Distinguished Flying Cross. His citation read: ‘Acting Squadron Leader Boles, as Pilot, has completed numerous operations against the enemy, in the course of which he has invariably shown the utmost fortitude, courage and devotion to duty.’ He was also awarded the Légion d’honneur, France’s highest honour. After the war, Sqn Ldr Boles helped to train Canadian pilots before he left the Air Force and became an engineer. He leaves three grown-up children, four grandchildren and five great-grandchildren.

FOUR MORE Texan trainers are to be added to the fleet at RAF Valley to train future pilots under a £65 million deal. Affinity Flying Training Services, which uses the Tucano replacement to deliver basic fast jet tuition to the Royal Air Force and Royal Navy at the Anglesey station, says the deal secures 12 years of operation for the extra aircraft received in 2020. An AFTS spokesman said: “The addition and operation of the new aircraft will provide increased training support and an uplift in training and flight hours for the UK Military Flying Training System programme, with full capability in place by 2024.” The additional Texans will operate from Affinity’s site at RAF Valley, joining the 10 others

already in service. The Texan II is the second stage of a training system that sees students perform their primary flight training

on the Grob 120TP Prefect piston-engined aircraft before progressing onto the Texan II and then the BAE Systems Hawk T2.