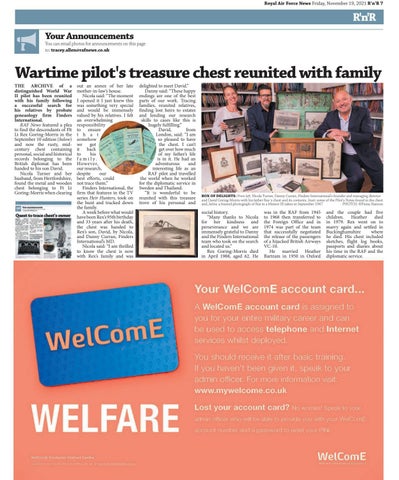 Wartime pilot&#39;s treasure chest reunited with family THE ARCHIVE of a distinguished World War II pilot has been reunited with his family following a successful search for his relatives by probate geneaology firm Finders International. RAF News featured a plea to find the descendants of Flt Lt Rex Goring-Morris in the September 10 edition (below) and now the rusty, midcentury chest containing personal, social and historical records belonging to the British diplomat has been handed to his son David. Nicola Turner and her husband, from Hertfordshire, found the metal and wooden chest belonging to Ft Lt Goring-Morris when clearing

out an annex of her late mother-in-law’s house. Nicola said: “The moment I opened it I just knew this was something very special and would be immensely valued by his relatives. I felt an overwhelming responsibility to ensure t h a t somehow we got it back to his f a m i l y. Howe ver, our research, despite our best efforts, could not trace them.” Finders International, the firm that features in the TV series Heir Hunters, took on the hunt and tracked down the family. A week before what would have been Rex’s 95th birthday and 33 years after his death, the chest was handed to Rex’s son, David, by Nicola, and Danny Curran, Finders International’s MD. Nicola said: “I am thrilled to know the chest is now with Rex’s family and was

delighted to meet David.” Danny said: “These happy endings are one of the best parts of our work. Tracing families, reunited relatives, finding lost heirs to estates and lending our research skills to cases like this is hugely fulfilling.” David, from London, said: “I am so pleased to have the chest. I can’t get over how much of my father’s life is in it. He had an adventurous and interesting life as an RAF pilot and travelled the world when he worked for the diplomatic service in Sweden and Thailand. “It is wonderful to be reunited with this treasure trove of his personal and

BOX OF DELIGHTS: From left, Nicola Turner, Danny Curran, Finders International&#39;s founder and managing director and David Goring-Morris with his father Rex &#39;s chest and its contents. Inset: some of the Pilot&#39;s Notes found in the chest and, below, a framed photograph of Rex in a Meteor III taken in September 1947 PHOTOS: ©Fiona Hanson

social history. “Many thanks to Nicola for her kindness and perseverance and we are immensely grateful to Danny and the Finders International team who took on the search and located us.” Rex Goring-Morris died in April 1988, aged 62. He

was in the RAF from 1945 to 1968 then transferred to the Foreign Office and in 1974 was part of the team that successfully negotiated the release of the passengers of a hijacked British Airways VC-10. He married Heather Bartram in 1950 in Oxford

and the couple had five children. Heather died in 1979. Rex went on to marry again and settled in Buckinghamshire where he died. His chest included sketches, flight log books, passports and diaries about his time in the RAF and the diplomatic service.