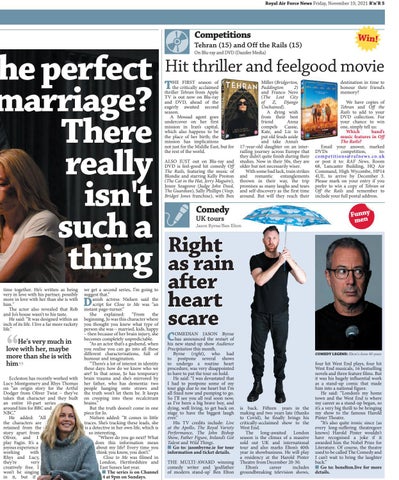 he perfect marriage? There really isn&#39;t such a thing time together. He’s written as being very in love with his partner, possibly more in love with her than she is with him.&quot; The actor also revealed that Rob and Jo’s house wasn’t to his taste. He said: “It was designed within an inch of its life. I live a far more rackety life.”

He&#39;s very much in love with her, maybe more than she is with him

Eccleston has recently worked with Lucy Montgomery and Rhys Thomas on “an origin story for the Artful Dodger from Oliver Twist – they’ve taken that character and they built an entire 10-part series around him for BBC and NBC.” He added: “All the characters are retained from the story apart from Oliver, and I play Fagin. It’s a joyous experience working with Rhys and Lucy, they’re very creatively free. I won’t be singing in it, but if

we get a second series, I’m going to suggest that.” anish actress Nielsen said the script for Close to Me was “an instant page-turner.” She explained: “From the beginning, Jo was this character where you thought you knew what type of person she was – married, kids, happy – then because of her brain injury, she becomes completely unpredictable. “As an actor that’s a godsend, when you realise you can go into all these different characterisations, full of humour and imagination. “There’s a lot of interest in identity these days: how do we know who we are? In that sense, Jo has temporary brain trauma and she’s mirrored by her father, who has dementia: two people hanging onto straws and the truth won’t let them be. It keeps on creeping into these recalcitrant brains.” But the truth doesn’t come in one piece for Jo. Nielsen added: “It comes in little traces. She’s tracking these leads, she is a detective in her own life, which is so interesting. “Where do you go next? What does this information mean about my life? Every time you think you know, you don’t.” Close to Me was filmed in London, Hertfordshire and East Sussex last year. n The series is on Channel 4 at 9pm on Sundays.

On Blu-ray and DVD (Dazzler Media)

HE FIRST season of the critically acclaimed thriller Tehran from Apple TV is out now on Blu-ray and DVD, ahead of the eagerly awaited second season. A Mossad agent goes undercover on her first mission in Iran’s capital, which also happens to be the place of her birth; the mission has implications not just for the Middle East, but for the rest of the world. ALSO JUST out on Blu-ray and DVD is feel-good hit comedy Off The Rails, featuring the music of Blondie and starring Kelly Preston (The Cat in the Hat, Jerry Maguire), Jenny Seagrove (Judge John Deed, The Guardian), Sally Phillips (Veep, Bridget Jones franchise), with Ben

Miller (Bridgerton, Paddington 2) and Franco Nero (The Lost City of Z, Django Unchained). A dying wish from their best friend Anna compels Cassie, Kate, and Liz to put old feuds aside and take Anna’s 17-year-old daughter on an interrailing journey across Europe that they didn’t quite finish during their studies. Now in their 50s, they are older but not necessarily wiser. With some bad luck, train strikes and romantic entanglements thrown in their way, the trip promises as many laughs and tears and self-discovery as the first time around. But will they reach their

destination in time to honour their friend’s memory? We have copies of Tehran and Off the Rails to add to your DVD collection. For your chance to win one, simply tell us: Which band’s music features in Off The Rails? Email your answer, marked DVDs competition, to: c omp e t it i ons @ r af ne w s . c o. u k or post it to: RAF News, Room 68, Lancaster Building, HQ Air Command, High Wycombe, HP14 4UE, to arrive by December 3. Please mark on your entry if you prefer to win a copy of Tehran or Off the Rails and remember to include your full postal address.

Right as rain after heart scare

OMEDIAN JASON Byrne has announced the restart of his new stand-up show Audience Precipitation this month. Byrne (right), who had to postpone several shows to undergo a routine heart procedure, was very disappointed to have to put the tour on hold. He said: “I was devastated that I had to postpone some of my tour gigs due to me heart but I’m all fixed now and pumping to go. So I’ll see you all real soon now, as I’ve been a big brave boy, and dying, well living, to get back on stage to have the biggest laugh ever.” His TV credits include: Live at the Apollo, The Royal Variety Performance, The John Bishop Show, Father Figure, Ireland’s Got Talent and Wild Things. n Go to: jasonbyrne.ie for tour information and ticket details. THE MULTI-AWARD winning comedy writer and ‘godfather of modern stand-up’ Ben Elton

is back. Fifteen years in the making and two years late (thanks to Covid), he finally brings his critically-acclaimed show to the West End. The long-awaited London season is the climax of a massive sold out UK and international tour and also marks Elton’s 40th year in showbusiness. He will play a residency at the Harold Pinter Theatre from December 20-30. Elton’s career includes groundbreaking television shows,

four hit West End plays, four hit West End musicals, 16 bestselling novels and three feature films. But it was his hugely influential work as a stand-up comic that made him into a national figure. He said: “London’s my home town and the West End is where my career as a stand-up began, so it’s a very big thrill to be bringing my show to the famous Harold Pinter Theatre. “It’s also quite ironic since (as every long-suffering theatregoer knows) Harold Pinter wouldn’t have recognised a joke if it awarded him the Nobel Prize for Literature. Of course, the theatre used to be called The Comedy and I can’t wait to bring the laughter back.” n Go to: benelton.live for more details.