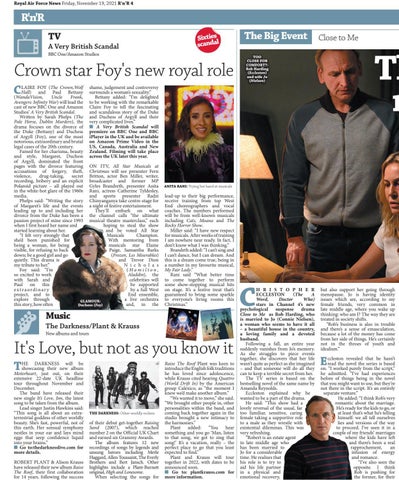 LAIRE FOY (The Crown,Wolf shame, judgement and controversy Hall) and Paul Bettany surrounds a woman’s sexuality.” (WandaVision, Uncle Frank, Bettany added: “I’m delighted Avengers: Infinity War) will lead the to be working with the remarkable cast of new BBC One and Amazon Claire Foy to tell the fascinating Studios’ A Very British Scandal. and scandalous story of the Duke Written by Sarah Phelps (The and Duchess of Argyll and their Pale Horse, Dublin Murders), the very complicated lives.” drama focuses on the divorce of n A Very British Scandal will the Duke (Bettany) and Duchess premiere on BBC One and BBC of Argyll (Foy), one of the most iPlayer in the UK and be available notorious, extraordinary and brutal on Amazon Prime Video in the legal cases of the 20th century. US, Canada, Australia and New Famed for her charisma, beauty Zealand. Filming will take place and style, Margaret, Duchess across the UK later this year. of Argyll, dominated the front pages with the divorce featuring ON ITV, All Star Musicals at accusations of forgery, theft, Christmas will see presenter Fern violence, drug-taking, secret Britton, actor Ben Miller, writer, recording, bribery and an explicit broadcaster and former MP Polaroid picture – all played out Gyles Brandreth, presenter Anita in the white-hot glare of the 1960s Rani, actress Catherine Tyldesley, media. and sports presenter Radzi Phelps said: “Writing the story Chinyanganya take centre-stage for of Margaret’s life and the events a night of festive entertainment. leading up to and including her They’ll embark on what divorce from the Duke has been a the channel calls “the ultimate passion project of mine since 1993 musical theatre masterclass,” each when I first heard her name and hoping to steal the show started learning about her. and be voted All Star “I felt very strongly that Musicals Champion. she’d been punished for With mentoring from being a woman, for being musicals star Elaine visible, for refusing to back Paige, Samantha Barks down; be a good girl and go (Frozen, Les Miserables) quietly. This drama is and Trevor Dion my tribute to her.” N i c h o l a s Foy said: “I’m (Hamilton, so excited to work Aladdin), the with Sarah and celebrities will Paul on this be supported extraordinar y by a full West project, and to End ensemble, explore through a live orchestra GLAMOUR: this story, how often and, in the Duchess (Foy)

lead-up to their big performance, receive training from top West End choreographers and vocal coaches. The numbers performed will be from well-known musicals including Cats, Moana and The Rocky Horror Show. Miller said: “I have new respect for musicals. After weeks of training I am nowhere near ready. In fact, I don’t know what I was thinking.” Brandeth added: “I can’t sing and I can’t dance, but I can dream. And this is a dream come true, being in a number in my favourite musical, My Fair Lady.” Rani said “What better time to come together to perform some show-stopping musical hits on stage. It’s a festive treat that’s guaranteed to bring some sparkle to everyone’s living rooms this Christmas.”

of their debut get-together Raising Sand (2007), which reached number 2 on the Official UK Chart and earned six Grammy Awards. The album features 12 new recordings of songs by legends and unsung heroes including Merle Haggard, Allen Toussaint, The Everly Brothers and Bert Jansch. Other highlights include a Plant-Burnett original, High and Lonesome. When selecting the songs for

HE DARKNESS will be showcasing their new album Motorheart, just out, on their extensive 22-date UK headline tour throughout November and December. The band have released their new single It’s Love, Jim, the latest song to be taken from the album. Lead singer Justin Hawkins said: “This song is all about an extraterrestrial goddess of other worldly beauty. She’s fast, powerful, not of this earth. Her sensual symphony nestles in your ear and lays mind eggs that seep confidence liquid into your brains.” n Go to:thedarknesslive.com for more details.

The Big Event Close to Me

Raise The Roof Plant was keen to introduce the English folk traditions he has loved since adolescence, while Krauss cited hearing Quattro (World Drift In) by the American group Calexico, as “the moment I knew we’d make another album.” “We wanted it to move,” she said. “We brought other people in, other personalities within the band, and coming back together again in the studio brought a new intimacy to the harmonies.” Plant added: “You hear something and you go ‘Man, listen to that song, we got to sing that song!’ It’s a vacation, really – the perfect place to go that you least expected to find.” Plant and Krauss will tour together in 2022, with dates to be announced soon. n Go to: plantkrauss.com for more information.

H R I S T O P H E R ECCLESTON (The A Word, Doctor Who) stars in Channel 4’s new psychological suspense drama Close to Me as Rob Harding, who is married to Jo (Connie Nielsen), a woman who seems to have it all – a beautiful house in the country, a loving family and a devoted husband. Following a fall, an entire year suddenly vanishes from Jo’s memory. As she struggles to piece events together, she discovers that her life wasn’t quite as perfect as she imagined – and that someone will do all they can to keep a terrible secret from her. The TV series is based on the bestselling novel of the same name by Amanda Reynolds. Eccleston explained why he wanted to be a part of the drama. He said: “This show had a lovely reversal of the usual, far too familiar, sensitive, caring female taking a supportive role to a male as they wrestle with existential dilemmas. This was very refreshing. “Robert is an estate agent in late middle age who has been married to Jo for a considerable time. He realises that his role is to try to aid his life partner in a physical and emotional recovery,

but also support her going through menopause. Jo is having identity issues which are, according to my female friends, very common in late middle age, where you wake up thinking: who am I? The way they are treated in society shifts. “Rob’s business is also in trouble and there’s a sense of emasculation, because a lot of the money has come from her side of things. He’s certainly not in the throes of youth and idealism.”

ccleston revealed that he hasn’t read the novel the series is based on. “I worked purely from the script,” he admitted. “I’ve had experiences before of things being in the novel that you might want to use, but they’re not there in the script. It’s an entirely separate venture.” He added: “I think Rob’s very romantic about the marriage. He’s ready for the kids to go, or at least that’s what he’s telling himself: we all tell ourselves lies and versions of the way to proceed. I’ve seen it in a couple of my friends’ marriages where the kids have left and there’s been a real rapprochement, an infusion of energy and romance. “I’ve also seen the opposite. I think Rob is pushing for the former, for their