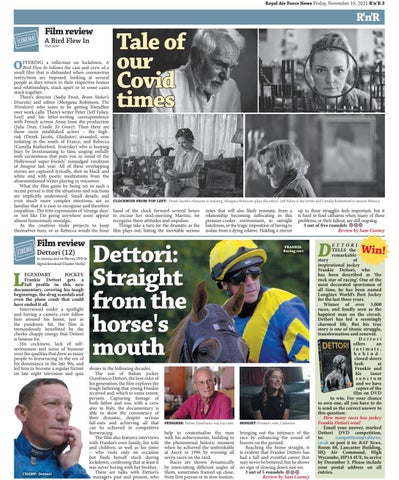 FFERING a reflection on lockdown, A Bird Flew In follows the cast and crew of a small film that is disbanded when coronavirus restrictions are imposed; looking at several people as they return to their respective homes and relationships, stuck apart or in some cases stuck together. There’s director (Sadie Frost, Bram Stoker’s Dracula) and editor (Morgana Robinson, The Windsors) who seem to be getting friendlier over work calls. There’s writer Peter (Jeff Fahey, Lost) and his letter-writing correspondence with French actress Anna from the production (Julie Dray, Cradle To Grave). Then there are those more established actors – the highrisk (Derek Jacobi, Gladiator) stranded, now isolating in the south of France, and Rebecca (Camilla Rutherford, Yesterday) who is keeping busy by livestreaming to fans; singing awfully with earnestness that puts you in mind of the Hollywood super-friends’ misjudged rendition of Imagine last year. All of these overlapping stories are captured lyrically, shot in black and white and with poetic meditations from the aforementioned writer playing in voiceover. What the film gains by being set in such a recent period is that the situations and reactions are implicitly understood. Small details, and even much more complex emotions, are so familiar that it is easy to recognise and therefore empathise. The trite expressions of ‘strange days’ or ‘not like I’m going anywhere soon’ appear almost humorously nostalgic. As the creatives make projects to keep themselves busy, or as Rebecca winds the hour

EGENDARY JOCKEY Frankie Dettori gets a full profile in this new documentary, covering his tough beginnings, the drug scandals and even the plane crash that could have ended it all. Interviewed under a spotlight and having a camera crew follow him around his home, just as the pandemic hit, the film is tremendously benefitted by the cheeky-chappy energy that Dettori is famous for. His cockiness, lack of selfseriousness and sense of humour were the qualities that drew so many people to horseracing in the era of his dominance in the late 90s, and led him to become a regular fixture on late night television and quiz

Tale of our Covid times

hand of the clock forward several hours to excuse her mid-morning Martini, we recognise these attitudes and impulses. Things take a turn for the dramatic as the film plays out, hitting the inevitable serious

notes that will also likely resonate; from a relationship becoming suffocating in this pressure-cooker environment, to outright loneliness, or the tragic imposition of having to isolate from a dying relative. Holding a mirror

Dettori: Straight from the horse&#39;s mouth shows in the following decades. The son of Italian jockey Gianfranco Dettori, the best rider of his generation, the film explores the tough fathering that young Frankie received and, which to some extent, persists. Capturing footage of both father and son, with a crew also in Italy, the documentary is able to show the consistency of their dynamic, despite serious fall-outs and achieving all that can be achieved in competitive horseracing. The film also features interviews with Frankie’s own family, his wife and children, as well as his sister – who visits only on occasion but finds herself stuck during lockdown, confessing that at least it was never boring with her brother. There are talks with Dettori’s managers past and present, who

up to these struggles feels important, but it is hard to find catharsis when many of these problems, or their fallout, are still ongoing. 3 out of five roundels Review by Sam Cooney

help to contextualise the man with his achievements, building to the phenomenal historic moment when he achieved the unthinkable at Ascot in 1996 by winning all seven races on the card. Races are shown dynamically by intercutting different angles of them, sometimes framed up close, from first person or in slow motion,

bringing out the intimacy of the race by enhancing the sound of hooves on the ground. Reaching the home straight, it is evident that Frankie Dettori has had a full and eventful career that may never be bettered, but he shows no sign of slowing down just yet. 3 out of 5 roundels Review by Sam Cooney

ETTORI TELLS the remarkable story of inspirational jockey Frankie Dettori, who has been described as ‘the rock star of racing’. One of the most decorated sportsmen of all time, he has been named Longines World’s Best Jockey for the last three years. Winner of over 3,000 races, and fondly seen as the happiest man on the circuit, Dettori has led a seemingly charmed life. But his true story is one of titanic struggle, transformation and renewal. Dettori offers an intimate, behindclosed-doors look at Frankie and his inner sanctum and we have copies of the film on DVD to win. For your chance to own one, all you have to do is send us the correct answer to this question: How many races has jockey Frankie Dettori won? Email your answer, marked Dettori DVD competition, to: competitions@rafnews. co.uk or post it to: RAF News, Room 68, Lancaster Building, HQ Air Command, High Wycombe, HP14 4UE, to arrive by December 3. Please include your postal address on all entries.