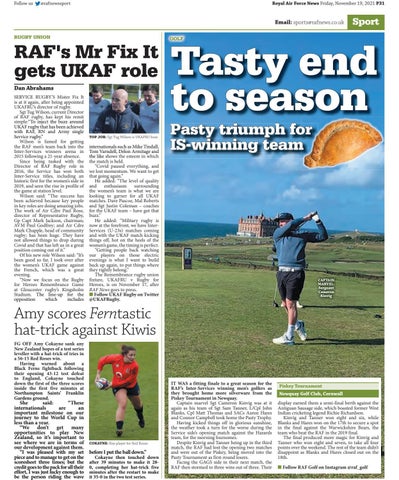 RAF&#39;s Mr Fix It gets UKAF role Dan Abrahams SERVICE RUGBY’S Mister Fix It is at it again, after being appointed UKAFRU’s director of rugby. Sgt Tug Wilson, current Director of RAF rugby, has kept his remit simple:“To inject the buzz around UKAF rugby that has been achieved with RAF, RN and Army single Service rugby.” Wilson is famed for getting the RAF men’s team back into the Inter-Services winners arena in 2015 following a 21-year absence. Since being tasked with the Director of RAF Rugby role in 2016, the Service has won both Inter-Service titles, including an historic first for the women’s side in 2019, and seen the rise in profile of the game at station level. Wilson said: “The success has been achieved because key people in key roles are doing amazing jobs. The work of Air Cdre Paul Rose, director of Representative Rugby, Gp Capt Mark Jackson, chairman; AVM Paul Godfrey; and Air Cdre Mark Chapple, head of community rugby; has been huge. They have not allowed things to drop during Covid and that has left us in a great position coming out of it.” Of his new role Wilson said: “It’s been good so far, I took over after the women’s UKAF game against the French, which was a great evening. “Now we focus on the Rugby for Heroes Remembrance Game at Gloucester rugby’s Kingsholm Stadium. The line-up for the opposition which includes

internationals such as Mike Tindall, Tom Varndell, Delon Armitage and the like shows the esteem in which the match is held. “Covid paused everything, and we lost momentum. We want to get that going again.” He added: “The level of quality and enthusiasm surrounding the women’s team is what we are looking to garner for all UKAF matches. Dave Pascoe, Mal Roberts and Sgt Justin Coleman – coaches for the UKAF team – have got that buzz.” He added: “Military rugby is now at the forefront, we have InterServices (U-23s) matches coming and with the UKAF match kicking things off, hot on the heels of the women’s game, the timing is perfect. “Getting people back watching our players on those electric evenings is what I want to build back up again, to put things where they rightly belong.” The Remembrance rugby union fixture, UKAFRU v Rugby for Heroes, is on November 17, after RAF News goes to press. ■ Follow UKAF Rugby on Twitter @UKAFRugby.

Amy scores Ferntastic hat-trick against Kiwis FG OFF Amy Cokayne sank any New Zealand hopes of a test series leveller with a hat-trick of tries in a 56-15 Red Roses win. Having warned about a Black Ferns fightback following their opening 43-12 test defeat to England, Cokayne touched down the first of the three scores inside the first five minutes at Northampton Saints’ Franklin Gardens ground.

She said: “These internationals are an important milestone on our journey to the World Cup in less than a year. “We don’t get many opportunities to play New Zealand, so it’s important to see where we are in terms of our development against them. “I was pleased with my set piece and to manage to get on the scoresheet three times; but the credit goes to the pack for all their effort, I was just lucky enough to be the person riding the wave

before I put the ball down.”

Cokayne then touched down after 39 minutes to make it 280, completing her hat-trick five minutes after the restart to make it 35-0 in the two test series.

IT WAS a fitting finale to a great season for the RAF’s Inter-Services winning men’s golfers as they brought home more silverware from the Piskey Tournament in Newquay. Captain marvel Sgt Cameron Kinvig was at it again as his team of Sgt Sam Tanner, L/Cpl John Blanks, Cpl Matt Thomas and SACs Aaron Hares and Connor Campbell took home the Pasty Trophy. Having kicked things off in glorious sunshine, the weather took a turn for the worse during the Service side’s opening match against the Hazards team, for the morning foursomes. Despite Kinvig and Tanner being up in the third match, the RAF had lost the opening two matches and were out of the Piskey, being moved into the Pasty Tournament as first-round losers. Facing the GAGS side in their next match, the RAF then stormed to three wins out of three. Their

Piskey Tournament Newquay Golf Club, Cornwall display earned them a semi-final berth against the Antiguan Sausage side, which boasted former West Indian cricketing legend Richie Richardson. Kinvig and Tanner won eight and six, while Blanks and Hares won on the 17th to secure a spot in the final against the Warwickshire Bears, the team who beat the RAF in the 2019 final. The final produced more magic for Kinvig and Tanner who won eight and seven, to take all four points over the weekend. The rest of the team didn’t disappoint as Blanks and Hares closed out on the 18th. ■ Follow RAF Golf on Instagram @raf_golf