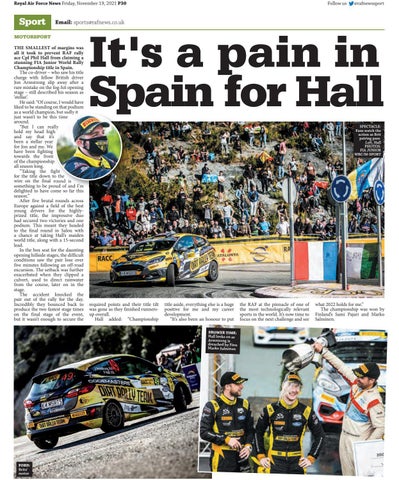 MOTORSPORT THE SMALLEST of margins was all it took to prevent RAF rally ace Cpl Phil Hall from claiming a stunning FIA Junior World Rally Championship title in Spain. The co-driver – who saw his title charge with fellow British driver Jon Armstrong slip away after a rare mistake on the fog-hit opening stage – still described his season as ‘stellar’. He said: “Of course, I would have liked to be standing on that podium as a world champion, but sadly it just wasn’t to be this time around. “But I can really hold my head high and say that it’s been a stellar year for Jon and me. We have been fighting towards the front of the championship all season long. “Taking the fight for the title down to the wire on the final round is something to be proud of and I’m delighted to have come so far this season.” After five brutal rounds across Europe against a field of the best young drivers for the highlyprized title, the impressive duo had secured two victories and one podium. This meant they headed to the final round in Salou with a chance at taking Hall’s maiden world title, along with a 15-second lead. In the box seat for the daunting opening hillside stages, the difficult conditions saw the pair lose over five minutes following an off-road excursion. The setback was further exacerbated when they clipped a culvert, used to direct rainwater from the course, later on in the stage. The accident knocked the pair out of the rally for the day. Incredibly they bounced back to produce the two fastest stage times on the final stage of the event, but it wasn’t enough to secure the

required points and their title tilt was gone as they finished runnersup overall. Hall added: “Championship

title aside, everything else is a huge positive for me and my career development. “It’s also been an honour to put SHOWER TIME: Hall looks on as Armstrong is drenched by Finn Marko Salminen

the RAF at the pinnacle of one of the most technologically relevant sports in the world. It’s now time to focus on the next challenge and see

what 2022 holds for me.” The championship was won by Finland’s Sami Pajari and Marko Salminen.