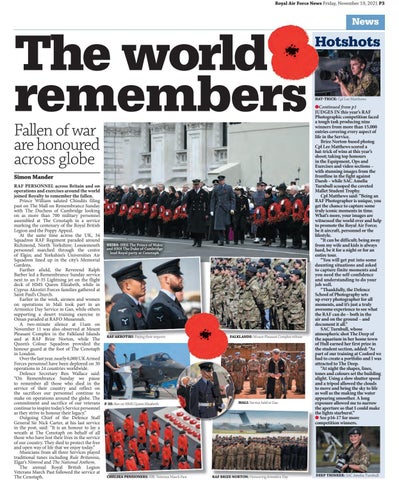 The world remembers Fallen of war are honoured across globe Simon Mander RAF PERSONNEL across Britain and on operations and exercises around the world joined Royalty to remember the fallen. Prince William saluted Chindits filing past on The Mall on Remembrance Sunday with The Duchess of Cambridge looking on as more than 700 military personnel assembled at The Cenotaph in a service marking the centenary of the Royal British Legion and the Poppy Appeal. At the same time across the UK, 34 Squadron RAF Regiment paraded around Richmond, North Yorkshire; Lossiemouth personnel marched through the centre of Elgin; and Yorkshire’s Universities Air Squadron lined up in the city’s Memorial Gardens. Further afield, the Reverend Ralph Barber led a Remembrance Sunday service next to an F-35 Lightning jet on the flight deck of HMS Queen Elizabeth, while in Cyprus Akrotiri Forces families gathered at Saint Paul’s Church. Earlier in the week, airmen and women on operations in Mali took part in an Armistice Day Service in Gao, while others supporting a desert training exercise in Oman paraded at RAFO Musannah. A two-minute silence at 11am on November 11 was also observed at Mount Pleasant Complex in the Falkland Islands and at RAF Brize Norton, while The Queen’s Colour Squadron provided the honour guard at the foot of The Cenotaph in London. Over the last year, nearly 6,000 UK Armed Forces personnel have been deployed on 30 operations in 24 countries worldwide. Defence Secretary Ben Wallace said: “On Remembrance Sunday we pause to remember all those who died in the service of their country and reflect on the sacrifices our personnel continue to make on operations around the globe. The commitment and sacrifice of our veterans continue to inspire today’s Service personnel as they strive to honour their legacy.” Outgoing Chief of the Defence Staff General Sir Nick Carter, at his last service in the post, said: “It is an honour to lay a wreath at The Cenotaph on behalf of all those who have lost their lives in the service of our country. They died to protect the free and open way of life that we enjoy today.” Musicians from all three Services played traditional tunes including Rule Britannia, Elgar’s Nimrod and The National Anthem. The annual Royal British Legion Veterans March Past followed the service at The Cenotaph.

HEIRS: HRH The Prince of Wales and HRH The Duke of Cambridge lead Royal party at Cenotaph

●Continued from p1 JUDGES IN this year’s RAF Photographic competition faced a tough task producing nine winners from more than 15,000 entries covering every aspect of life in the Service. Brize Norton-based photog Cpl Lee Matthews scored a hat-trick of wins at this year’s shoot; taking top honours in the Equipment, Ops and Exercises and video sections – with stunning images from the frontline in the fight against Daesh – while SAC Amelia Turnbull scooped the coveted Mallet Student Trophy. Cpl Matthews said: “Being an RAF Photographer is unique, you get the chance to capture some truly iconic moments in time. What’s more, your images are witnessed the world over and help to promote the Royal Air Force; be it aircraft, personnel or the lifestyle. “It can be difficult; being away from my wife and kids is always hard, be it for a night or for an entire tour. “You will get put into some daunting situations and asked to capture finite moments and you need the self-confidence and understanding to do your job well. “Thankfully, the Defence School of Photography sets up every photographer for all moments, and it’s just a truly awesome experience to see what the RAF can do – both in the air and on the ground – and document it all.” SAC Turnbull, whose atmospheric shot The Deep of the aquarium in her home town of Hull earned her first prize in the student section, added: “As part of our training at Cosford we had to create a portfolio and I was attracted to The Deep. “At night the shapes, lines, tones and colours set the building alight. Using a slow shutter speed and a tripod allowed the clouds to move and bring the sky to life as well as the making the water appearing smoother. A long exposure allowed me to narrow the aperture so that I could make the lights starburst.” ● See p16-17 for more competition winners.