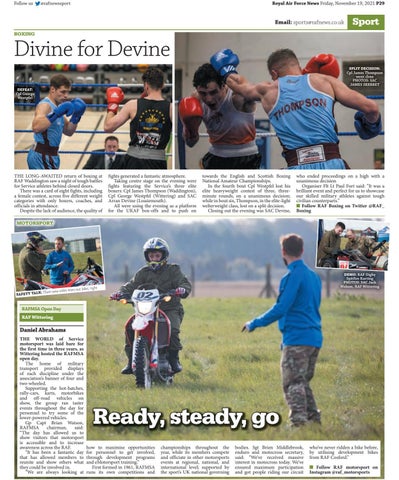 THE LONG-AWAITED return of boxing at RAF Waddington saw a night of tough battles for Service athletes behind closed doors. There was a card of eight fights, including a female contest, across five different weight categories with only boxers, coaches, and officials in attendance. Despite the lack of audience, the quality of

fights generated a fantastic atmosphere. Taking centre stage on the evening were fights featuring the Service’s three elite boxers: Cpl James Thompson (Waddington), Cpl George Westpfel (Wittering) and SAC Arran Devine (Lossiemouth). All were using the evening as a platform for the UKAF box-offs and to push on

towards the English and Scottish Boxing National Amateur Championships. In the fourth bout Cpl Westpfel lost his elite heavyweight contest of three, threeminute rounds, on a unanimous decision; while in bout six, Thompson, in the elite-light welterweight class, lost on a split decision. Closing out the evening was SAC Devine,

who ended proceedings on a high with a unanimous decision Organiser Flt Lt Paul Fort said: “It was a brilliant event and perfect for us to showcase our skilled military athletes against tough civilian counterparts.” ■ Follow RAF Boxing on Twitter @RAF_ Boxing

Daniel Abrahams THE WORLD of Service motorsport was laid bare for the first time in three years, as Wittering hosted the RAFMSA open day. The home of military transport provided displays of each discipline under the association’s banner of four and two-wheeled. Supporting the hot-hatches, rally-cars, karts, motorbikes and off-road vehicles on show, the group ran taster events throughout the day for personnel to try some of the lower-powered vehicles. Gp Capt Brian Watson, RAFMSA chairman, said: “The day has allowed us to show visitors that motorsport is accessible and to increase awareness across the RAF. “It has been a fantastic day that has allowed members to reunite and show others what they could be involved in. “We are always looking at

Ready, steady, go how to maximise opportunities for personnel to get involved, through development programs and eMotorsport training.” First formed in 1961, RAFMSA runs its own competitions and

championships throughout the year, while its members compete and officiate in other motorsports events at regional, national, and international level; supported by the sport’s UK national governing