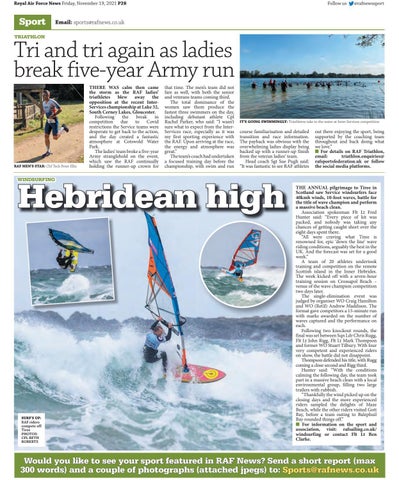 THERE WAS calm then came the storm as the RAF ladies’ triathletes blew away the opposition at the recent InterServices championship at Lake 32, South Cerney Lakes, Gloucester. Following the break in competition due to Covid restrictions the Service teams were desperate to get back to the action, and the day created a fantastic atmosphere at Cotswold Water Park. The ladies’ team broke a five-year Army stranglehold on the event, which saw the RAF continually holding the runner-up crown for

that time. The men’s team did not fare as well, with both the senior and veterans teams coming third. The total dominance of the women saw them produce the fastest three swimmers on the day, including debutant athlete Cpl Rachel Parker, who said: “I wasn’t sure what to expect from the InterServices race, especially as it was my first sporting experience with the RAF. Upon arriving at the race, the energy and atmosphere was great.” The team’s coach had undertaken a focused training day before the championship, with swim and run

course familiarisation and detailed transition and race information. The payback was obvious with the overwhelming ladies display being backed up with a runner-up finish from the veteran ladies’ team. Head coach Sgt Sue Pugh said: “It was fantastic to see RAF athletes

out there enjoying the sport, being supported by the coaching team throughout and back doing what we love.” ■ For details on RAF Triathlon, email: triathlon.enquiries@ rafsportsfederation.uk or follow the social media platforms.

THE ANNUAL pilgrimage to Tiree in Scotland saw Service windsurfers face 40kmh winds, 10-foot waves, battle for the title of wave champion and perform a massive beach clean. Association spokesman Flt Lt Fred Hunter said: “Every piece of kit was packed, and nobody was taking any chances of getting caught short over the eight days spent there. “All were craving what Tiree is renowned for, epic ‘down the line’ wave riding conditions, arguably the best in the UK. And the forecast was set for a good week.” A team of 20 athletes undertook training and competition on the remote Scottish island in the Inner Hebrides. The week kicked off with a seven-hour training session on Crossapol Beach – venue of the wave champion competition two days later. The single-elimination event was judged by organiser WO Craig Hamilton and WO (Ret’d) Andrew Maddison. The format gave competitors a 15-minute run with marks awarded on the number of waves captured and the performance on each. Following two knockout rounds, the final was set between Sqn Ldr Chris Rugg, Flt Lt John Rigg, Flt Lt Mark Thompson and former WO Stuart Tilbury. With four very competent and experienced riders on show, the battle did not disappoint. Thompson defended his title, with Rugg coming a close second and Rigg third. Hunter said: “With the conditions calming the following day, the team took part in a massive beach clean with a local environmental group, filling two large trailers with rubbish. “Thankfully the wind picked up on the closing days and the more experienced riders sampled the delights of Maze Beach, while the other riders visited Gott Bay, before a team outing to Balephuil Bay rounded things off.” ■ For information on the sport and association, visit: rafsailing.co.uk/ windsurfing or contact Flt Lt Ben Clarke.