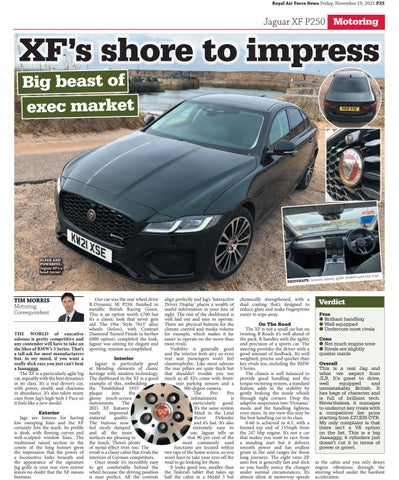 or (above), grille (m SHIPSHAPE: Interi

TIM MORRIS Motoring Correspondent THE WORLD of executive saloons is pretty competitive and any contender will have to take on the likes of BMW’s 3 Series. That’s a tall ask for most manufacturers but, in my mind, if you want a really slick exec you just can’t beat a Jaaaagggg. The XF is a particularly agile big cat, arguably with the best dynamics in its class. It’s a real driver’s car, with power, stealth and charisma in abundance. It’s also taken many cues from Jag’s high-tech I-Pace so it feels like a new model. Exterior Jags are famous for having low sweeping lines and the XF certainly hits the mark. Its profile is sleek, with flowing curves and well-sculpted window lines. The traditional raised section in the centre of the long bonnet gives the impression that the power of a locomotive lurks beneath and the appearance of the signature Jag grille in your rear view mirror leaves no doubt that the XF means business.

Our car was the rear wheel drive R-Dynamic SE P250, finished in metallic British Racing Green. This is an option worth £700 but it’s a classic look that never gets old. The 19in ‘Style 7013’ alloy wheels (below), with Contrast Diamond Turned Finish (a further £800 option) completed the look. Jaguar was aiming for elegant and sporting, mission accomplished. Interior Jaguar is particularly good at blending elements of classic heritage with modern technology. The dashboard in the XF is a good example of this, embedding the ‘Established 1935’ plaque into the glossy touch-screen instruments. The 2021 XF features vastly improved material quality. The buttons now feel nicely damped and all the main surfaces are pleasing to the touch. There’s plenty of metal-effect trim too. The result is a classy cabin that rivals the interiors of German competitors. Once inside it’s incredibly easy to get comfortable behind the wheel because the driving position is near perfect. All the controls

align perfectly and Jag’s ‘Interactive Driver Display’ places a wealth of useful information in your line of sight. The rest of the dashboard is well laid out and easy to operate. There are physical buttons for the climate control and media volume for example, which makes it far easier to operate on the move than most rivals. Visibility is generally good and the interior feels airy so even rear seat passengers won’t feel claustrophobic. Like most saloons the rear pillars are quite thick but that shouldn’t trouble you too much as all XFs come with front/ rear parking sensors and a 360-degree camera. The Pivi Pro infotainment is particularly good. It’s the same system fitted in the Land Rover Defender and it’s fast. It’s also extremely easy to use. Jaguar tells us that 90 per cent of the most commonly used functions are located within two taps of the home screen, so you won’t have to take your eyes off the road to go looking for them. It looks good too, smaller than the Teslerati tablet that takes up half the cabin in a Model 3 but

chemically strengthened, with a dual coating that’s designed to reduce glare and make fingerprints easier to wipe away. On The Road The XF is not a small car but on twisting B Roads it’s well ahead of the pack. It handles with the agility and precision of a sports car. The steering provides the driver with a good amount of feedback. It’s well weighted, precise and quicker than key rivals too, including the BMW 5 Series. The chassis is well balanced to provide good handling and the torque vectoring system, a standard feature, adds to the stability by gently braking the inside wheels through tight corners. Drop the adaptive suspension into ‘Dynamic’ mode and the handling tightens even more. In my view this may be the best handling car in its class. 0-60 is achieved in 6.5, with a limited top end of 155mph from the 247 bhp engine. It’s not a car that makes you want to race from a standing start but it delivers smooth power and has endless grunt in the mid ranges for those long journeys. The eight ratio ZF auto box is generally fast and slick so you hardly notice the changes under normal circumstances. It’s almost silent at motorway speeds

Verdict Pros ● Brilliant handling ● Well equipped ● Undercuts most rivals Cons ● Not much engine tone ● Rivals are slightly quieter inside Overall This is a real Jag and what we expect from JLR. It’s great to drive, well equipped and unmistakably British. It has bags of character and is full of brilliant tech. Nevertheless, it manages to undercut key rivals with a competitive list price starting from £37,835 OTR. My only complaint is that there isn’t a V6 option on the list. This is a big Jaaaaggg, 4 cylinders just doesn’t cut it in terms of power or growl. in the cabin and you only detect engine vibrations through the steering wheel under the harshest acceleration.