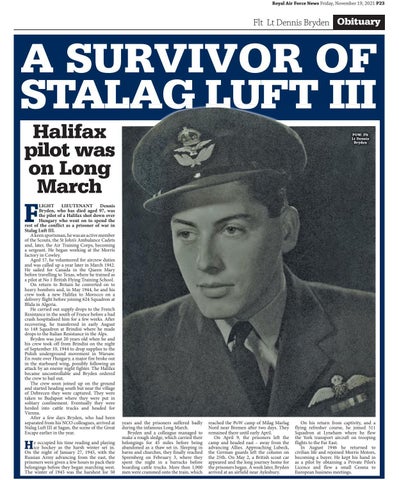 LIGHT LIEUTENANT Dennis Bryden, who has died aged 97, was the pilot of a Halifax shot down over Hungary who went on to spend the rest of the conflict as a prisoner of war in Stalag Luft III. A keen sportsman, he was an active member of the Scouts, the St John’s Ambulance Cadets and, later, the Air Training Corps, becoming a sergeant. He began working at the Morris factory in Cowley. Aged 17, he volunteered for aircrew duties and was called up a year later in March 1942. He sailed for Canada in the Queen Mary before travelling to Texas, where he trained as a pilot at No 1 British Flying Training School. On return to Britain he converted on to heavy bombers and, in May 1944, he and his crew took a new Halifax to Morocco on a delivery flight before joining 624 Squadron at Blida in Algeria. He carried out supply drops to the French Resistance in the south of France before a bad crash hospitalised him for a few weeks. After recovering, he transferred in early August to 148 Squadron at Brindisi where he made drops to the Italian Resistance in the Alps. Bryden was just 20 years old when he and his crew took off from Brindisi on the night of September 10, 1944 to drop supplies to the Polish underground movement in Warsaw. En route over Hungary, a major fire broke out in the starboard wing, possibly following an attack by an enemy night fighter. The Halifax became uncontrollable and Bryden ordered the crew to bail out. The crew soon joined up on the ground and started heading south but near the village of Debrecen they were captured. They were taken to Budapest where they were put in solitary confinement. Eventually they were herded into cattle trucks and headed for Vienna. After a few days Bryden, who had been separated from his NCO colleagues, arrived at Stalag Luft III at Sagan, the scene of the Great Escape earlier in the year.

e occupied his time reading and playing ice hockey as the harsh winter set in. On the night of January 27, 1945, with the Russian Army advancing from the east, the prisoners were given a few hours to pack their belongings before they began marching west. The winter of 1945 was the harshest for 50

years and the prisoners suffered badly during the infamous Long March. Bryden and a colleague managed to make a rough sledge, which carried their belongings for 45 miles before being abandoned as a thaw set in. Sleeping in barns and churches, they finally reached Spremberg on February 3, where they spent the night in a barracks before boarding cattle trucks. More then 1,900 men were crammed onto the train, which

reached the PoW camp of Milag Marlag Nord near Bremen after two days. They remained there until early April. On April 9, the prisoners left the camp and headed east – away from the advancing Allies. Approaching Lubeck, the German guards left the column on the 25th. On May 2, a British scout car appeared and the long journey home for the prisoners began. A week later, Bryden arrived at an airfield near Aylesbury.

On his return from captivity, and a flying refresher course, he joined 511 Squadron at Lyneham where he flew the York transport aircraft on trooping flights to the Far East. In August 1946 he returned to civilian life and rejoined Morris Motors, becoming a buyer. He kept his hand in as a pilot by obtaining a Private Pilot’s Licence and flew a small Cessna to European business meetings.