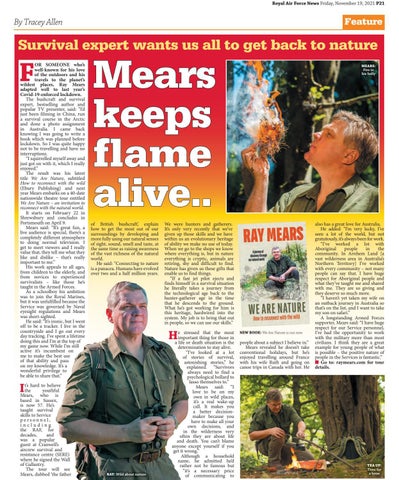 Survival expert wants us all to get back to nature

OR SOMEONE who’s well-known for his love of the outdoors and his travels to the planet’s wildest places, Ray Mears adapted well to last year’s Covid-19-enforced lockdown. The bushcraft and survival expert, bestselling author and popular TV presenter, said: “I’d just been filming in China, run a survival course in the Arctic and done a photo assignment in Australia. I came back knowing I was going to write a book which was planned before lockdown. So I was quite happy not to be travelling and have no interruptions. “I squirrelled myself away and just got on with it, which I really enjoyed.” The result was his latest title We Are Nature, subtitled How to reconnect with the wild (Ebury Publishing) and next year Mears embarks on a 40-date nationwide theatre tour entitled We Are Nature – an invitation to reconnect with the natural world. It starts on February 22 in Shrewsbury and concludes in Portsmouth on April 9. Mears said: “It’s great fun, a live audience is special, there’s a completely different atmosphere to doing normal television. I get to meet viewers and I really value that, they tell me what they like and dislike – that’s really important to me.” His work appeals to all ages, from children to the elderly, and from novices to experienced survivalists – like those he’s taught in the Armed Forces. As a schoolboy his ambition was to join the Royal Marines, but it was unfulfilled because the Service was governed by Naval eyesight regulations and Mears was short-sighted. He said: “It’s ironic, but I went off to be a tracker. I live in the countryside and I go out every day tracking. I’ve spent a lifetime doing this and I’m at the top of my game now. While I’m still active it’s incumbent on me to make the best use of that ability and pass on my knowledge. It’s a wonderful privilege to be able to share that.”

of British bushcraft’, explain how to get the most out of our surroundings by developing and more fully using our natural senses of sight, sound, smell and taste, at the same time as raising awareness of the vast richness of the natural world. He said: “Connecting to nature is a panacea. Humans have evolved over two and a half million years.

t’s hard to believe the youthful Mears, who is based in Sussex, is now 57. He’s taught survival skills to Service personnel, including the RAF, for decades, and was a popular guest at Cranwell’s aircrew survival and resistance centre (SERE) where he signed the Wall of Gallantry. The tour will see Mears, dubbed ‘the father

We were hunters and gatherers. It’s only very recently that we’ve given up those skills and we have within us an evolutionary heritage of ability we make no use of today. When we go to the shops we know where everything is, but in nature everything is cryptic, animals are retiring, shy and difficult to find. Nature has given us these gifts that enable us to find things. “If a fast jet pilot ejects and finds himself in a survival situation he literally takes a journey from the technological age back to the hunter-gatherer age in the time that he descends to the ground. What he’s got working for him is this heritage, hardwired into the system. My job is to bring that out in people, so we can use our skills.”

MEARS: Fire in his belly

e stressed that the most important thing for those in a life or death situation is the determination to stay alive. “I’ve looked at a lot of stories of survival, astonishing stories,” he explained. “Survivors always need to find a psychological bollard to lasso themselves to.” Mears said: “I love to be on my own in wild places, it’s a real wake-up call. It makes you a better decisionmaker because you have to make all your own decisions, and in the wilderness very often they are about life and death. You can’t blame anyone except yourself if you get it wrong.” Although a household name, he admitted he’d rather not be famous but “it’s a necessary price of communicating to

NEW BOOK: We Are Nature is out now

people about a subject I believe in.” Mears revealed he doesn’t take conventional holidays, but he’s enjoyed travelling around France with his wife Ruth and going on canoe trips in Canada with her. He

also has a great love for Australia. He added: “I’m very lucky, I’ve seen a lot of the world, but not gratuitously, it’s always been for work. “I‘ve worked a lot with Aboriginal people in the community. In Arnhem Land [a vast wilderness area in Australia’s Northern Territory] I’ve worked with every community – not many people can say that. I have huge respect for Aboriginal people and what they’ve taught me and shared with me. They are so giving and they deserve so much more. “I haven’t yet taken my wife on an outback journey in Australia so that’s on the list, and I want to take my son on safari.” A longstanding Armed Forces supporter, Mears said: “I have huge respect for our Service personnel, I’ve had the opportunity to work with the military more than most civilians. I think they are a great example for young people of what is possible – the positive nature of people in the Services is fantastic.” ■ Go to: raymears.com for tour details.

TEA UP: Time for a brew