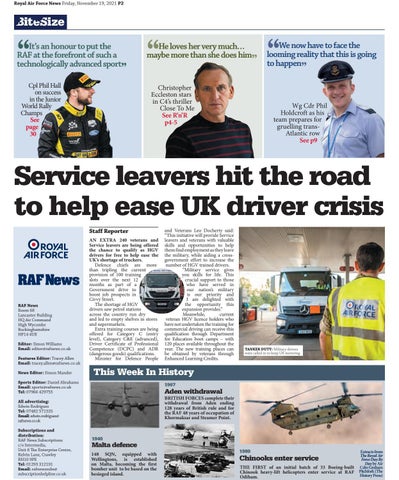 AN EXTRA 240 veterans and Service leavers are being offered the chance to qualify as HGV drivers for free to help ease the UK’s shortage of truckers. Defence chiefs are more than tripling the current provision of 100 training slots over the next 12 months as part of a Government drive to boost job prospects in Civvy Street. The shortage of HGV drivers saw petrol stations across the country run dry and led to empty shelves in stores and supermarkets. Extra training courses are being offered for Category C (entry level), Category C&amp;E (advanced), Driver Certificate of Professional Competence (DCPC) and ADR (dangerous goods) qualifications. Minister for Defence People

BRITISH FORCES complete their withdrawal from Aden ending 128 years of British rule and for the RAF 48 years of occupation of Khormaksar and Steamer Point.

and Veterans Leo Docherty said: “This initiative will provide Service leavers and veterans with valuable skills and opportunities to help them find employment as they leave the military, while aiding a crossgovernment effort to increase the number of HGV trained drivers. “Military service gives you skills for life. This crucial support to those who have served in our nation’s military is our priority and I am delighted with the opportunity this expansion provides.” Meanwhile, current veteran HGV licence holders who have not undertaken the training for commercial driving can receive this qualification through Department for Education boot camps – with 120 places available throughout the year. The new training places can be obtained by veterans through Enhanced Learning Credits.

Malta defence 148 SQN, equipped with Wellingtons, is established on Malta, becoming the first bomber unit to be based on the besieged island.