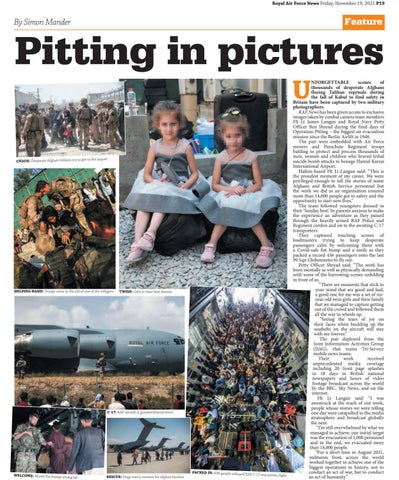 Pitting in pictures U airpor CHAOS: Desperate Afghan civilians try to get to the

HELPING HAND: Troops come to the aid of one of the refugees

TWINS: Girls in their best dresses

NFORGETTABLE scenes of thousands of desperate Afghans fleeing Taliban reprisals during the fall of Kabul to find safety in Britain have been captured by two military photographers. RAF News has been given access to exclusive images taken by combat camera team members Flt Lt James Langan and Royal Navy Petty Officer Ben Shread during the final days of Operation Pitting – the biggest air evacuation mission since the Berlin Airlift in 1948. The pair were embedded with Air Force movers and Parachute Regiment troops battling to protect and process thousands of men, women and children who braved lethal suicide bomb attacks to besiege Hamid Karzai International Airport. Halton-based Flt Lt Langan said: “This is the proudest moment of my career. We were privileged enough to tell the stories of some Afghans and British Service personnel but the work we did as an organisation ensured more than 14,000 people got to safety and the opportunity to start new lives.” The team followed youngsters dressed in their ‘Sunday best,’ by parents anxious to make the experience an adventure as they passed through the heavily armed RAF Police and Regiment cordon and on to the awaiting C-17 transporters. They captured touching scenes of loadmasters trying to keep desperate passengers calm by welcoming them with a Covid-safe fist bump and a smile as they packed a record 436 passengers onto the last 99 Sqn Globemaster to fly out. Petty Officer Shread said: “The work has been mentally as well as physically demanding with some of the harrowing scenes unfolding in front of us. “There are moments that stick in your mind that are good and bad, a good one for me was a set of sixyear-old twin girls and their family that we managed to capture getting out of the crowd and followed them all the way to wheels up. “Seeing the tears of joy on their faces when buckling up the seatbelts on the aircraft will stay with me forever.” The pair deployed from the Joint Information Activities Group (JIAG), that trains Tri-Service mobile news teams. Their work received unprecedented media coverage including 20 front page splashes in 18 days in British national newspapers and hours of video footage broadcast across the world by the BBC, Sky News, and on the internet. Flt Lt Langan said: “I was awestruck at the reach of our work, people whose stories we were telling one day were catapulted to the media stratosphere and broadcast globally the next. “I’m still overwhelmed by what we managed to achieve, our initial target was the evacuation of 5,000 personnel and in the end, we evacuated more than 14,000 people. “For a short time in August 2021, militaries from across the world worked together to achieve one of the biggest operations in history, not to conduct an act of war, but to conduct an act of humanity.”