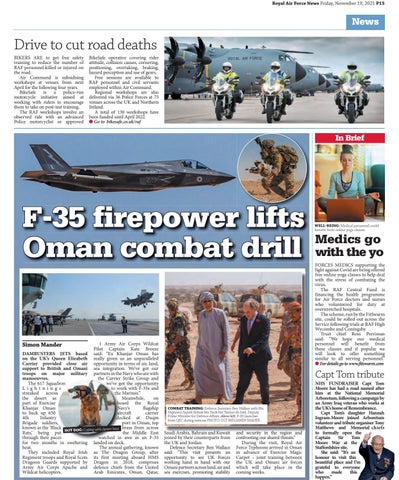 BIKERS ARE to get free safety training to reduce the number of RAF personnel killed or injured on the road. Air Command is subsidising workshops at venues from next April for the following four years. BikeSafe is a police-run motorcycle initiative aimed at working with riders to encourage them to take on post-test training. The RAF workshops involve an observed ride with an advanced Police motorcyclist or approved

BikeSafe operative covering rider attitude, collision causes, cornering, positioning, overtaking, braking, hazard perception and use of gears. Free sessions are available to RAF personnel and civil servants employed within Air Command. Regional workshops are also delivered via 36 Police Forces at 75 venues across the UK and Northern Ireland. A total of 130 workshops have been funded until April 2022. ● Go to bikesafe.co.uk/raf

1 Army Air Corps Wildcat Pilot Captain Kate Breeze DAMBUSTERS JETS based said: “Ex Khanjar Oman has on the UK’s Queen Elizabeth really given us an unparalleled Carrier provided close air opportunity in terms of air, land, support to British and Omani sea integration. We’ve got our troops on major military partners in the Navy who are with manoeuvres. the Carrier Strike Group and The 617 Squadron we’ve got the opportunity Lightnings to work with F-35s and streaked across the Marines.” the desert as Meanwhile, on part of Exercise board the Royal Khanjar Oman Navy’s flagship to back up 650 aircraft carrier 4th Infantry docked at Duqm Brigade soldiers, port in Oman, top known as the ‘Black HOT DOG: Coping with desert heat brass from across Rats,’ being put the Middle East through their paces watched in awe as an F-35 for two months in sweltering landed on deck. heat. The annual gathering, known They included Royal Irish as The Dragon Group, after Regiment troops and Royal Scots its first meeting aboard HMS Dragoon Guards supported by Dragon in 2018, comprises Army Air Corps Apache and defence chiefs from the United Wildcat helicopters. Arab Emirates, Oman, Qatar,

Medics go with the yo

FORCES MEDICS supporting the fight against Covid are being offered free online yoga classes to help deal with the stress of combating the virus. The RAF Central Fund is financing the health programme for Air Force doctors and nurses who volunteered for duty at overstretched hospitals. The scheme, run by the FitSwarm site, could be rolled out across the Service following trials at RAF High Wycombe and Coningsby. Trust chief Ross Perriman said: “We hope our medical personnel will benefit from these classes and if popular we will look to offer something similar to all serving personnel.” ● For details go to www.fitswarm.com

Saudi Arabia, Bahrain and Kuwait joined by their counterparts from the UK and Jordan. Defence Secretary Ben Wallace said: “This visit presents an opportunity to see UK Forces working hand in hand with our Omani partners across land, air and sea exercises, promoting stability

and security in the region and confronting our shared threats.” During the visit, Royal Air Force Typhoons arrived in Oman in advance of Exercise Magic Carpet – joint training between the UK and Omani air forces which will take place in the coming weeks.

NHS FUNDRAISER Capt Tom Moore has had a road named after him at the National Memorial Arboretum, following a campaign by an Army Iraq veteran who works at the UK’s home of Remembrance. Capt Tom’s daughter Hannah Ingram-Moore joined Arboretum volunteer and tribute organiser Tony Matthews and Memorial chiefs to formally open the Captain Sir Tom Moore Way at the Staffordshire site. She said: “It’s an honour to visit this beautiful place and I’m grateful to everyone who made this happen.”