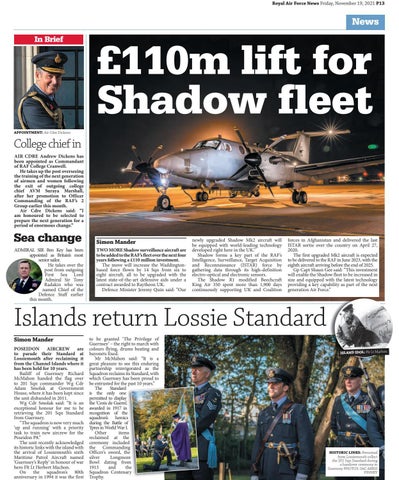 College chief in AIR CDRE Andrew Dickens has been appointed as Commandant of RAF College Cranwell. He takes up the post overseeing the training of the next generation of airmen and women following the exit of outgoing college chief AVM Suraya Marshall, after her promotion to Officer Commanding of the RAF’s 2 Group earlier this month. Air Cdre Dickens said: “I am honoured to be selected to prepare the next generation for a period of enormous change.”

Sea change ADMIRAL SIR Ben Key has been appointed as Britain’s most senior sailor. He takes over the post from outgoing First Sea Lord Admiral Sir Tony Radakin who was named Chief of the Defence Staff earlier this month.

Simon Mander TWO MORE Shadow surveillance aircraft are to be added to the RAF’s fleet over the next four years following a £110 million investment. The move will increase the Waddingtonbased force flown by 14 Sqn from six to eight aircraft, all to be upgraded with the latest state-of-the-art defensive aids under a contract awarded to Raytheon UK. Defence Minister Jeremy Quin said: “Our

forces in Afghanistan and delivered the last ISTAR sortie over the country on April 27, 2020. The first upgraded Mk2 aircraft is expected to be delivered to the RAF in June 2023, with the eighth aircraft arriving before the end of 2025. Gp Capt Shaun Gee said: “This investment will enable the Shadow fleet to be increased in size and equipped with the latest technology providing a key capability as part of the next generation Air Force.”

Islands return Lossie Standard Simon Mander POSEIDON AIRCREW are to parade their Standard at Lossiemouth after reclaiming it from the Channel Islands where it has been held for 10 years. Bailiff of Guernsey Richard McMahon handed the flag over to 201 Sqn commander Wg Cdr Adam Smolak at Government House, where it has been kept since the unit disbanded in 2011. Wg Cdr Smolak said: “It is an exceptional honour for me to be retrieving the 201 Sqn Standard from Guernsey. “The squadron is now very much ‘up and running’ with a priority task to train new aircrew for the Poseidon P8.” The unit recently acknowledged its historic links with the island with the arrival of Lossiemouth’s sixth Maritime Patrol Aircraft named ‘Guernsey’s Reply’ in honour of war hero Flt Lt Herbert Machon. On the squadron’s 80th anniversary in 1994 it was the first

to be granted ‘The Privilege of Guernsey’ – the right to march with colours flying, drums beating and bayonets fixed. Mr McMahon said: “It is a great pleasure to see this enduring partnership reinvigorated as the Squadron reclaims its Standard, with which Guernsey has been proud to be entrusted for the past 10 years.” The Standard is the only one permitted to display the ‘Croix de Guerre’, awarded in 1917 in recognition of the squadron’s heroics during the Battle of Ypres in World War I. Other items reclaimed at the ceremony included the Commanding Officer’s sword, the silver Longmore Bowl dating from 1913 and the Squadron Centenary Trophy.