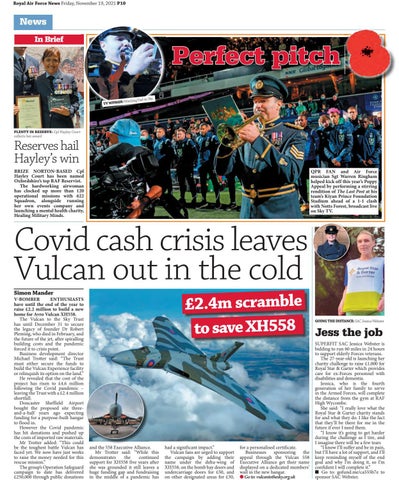 BRIZE NORTON-BASED Cpl Hayley Court has been named Oxfordshire’s top RAF Reservist. The hardworking airwoman has clocked up more than 120 operational missions with 622 Squadron, alongside running her own events company and launching a mental health charity, Healing Military Minds.

QPR FAN and Air Force musician Sgt Warren Ringham helped kick off this year’s Poppy Appeal by performing a stirring rendition of The Last Post at his team’s Kiyan Prince Foundation Stadium ahead of a 1-1 clash with Notts Forest, broadcast live on Sky TV.

V-BOMBER ENTHUSIASTS have until the end of the year to raise £2.2 million to build a new home for Avro Vulcan XH558. The Vulcan to the Sky Trust has until December 31 to secure the legacy of founder Dr Robert Pleming, who died in February, and the future of the jet, after spiralling building costs and the pandemic forced it to crisis point. Business development director Michael Trotter said: “The Trust must either secure the funds to build the Vulcan Experience facility or relinquish its option on the land.” He revealed that the cost of the project has risen to £4.6 million following the Covid pandemic – leaving the Trust with a £2.4 million shortfall. Doncaster Sheffield Airport bought the proposed site threeand-a-half years ago expecting funding for a purpose-built hangar to flood in. However the Covid pandemic has hit donations and pushed up the costs of imported raw materials. Mr Trotter added: “This could be the toughest battle Vulcan has faced yet. We now have just weeks to raise the money needed for this rescue mission.” The group’s Operation Safeguard campaign to date has delivered £250,000 through public donations

and the 558 Executive Alliance. Mr Trotter said: “While this demonstrates the continued support for XH558 five years after she was grounded it still leaves a huge funding gap and fundraising in the middle of a pandemic has

had a significant impact.” Vulcan fans are urged to support the campaign by adding their name under the delta-wing of XH558, on the bomb bay doors and undercarriage doors for £50, and on other designated areas for £30,

for a personalised certificate. Businesses sponsoring the appeal through the Vulcan 558 Executive Alliance get their name displayed on a dedicated members’ wall in the new hangar. ● Go to: vulcantothesky.org.uk

Jess the job SUPERFIT SAC Jessica Webster is bidding to run 60 miles in 24 hours to support elderly Forces veterans. The 27-year-old is launching her charity challenge to raise £1,000 for Royal Star &amp; Garter which provides care for ex-Forces personnel with disabilities and dementia. Jessica, who is the fourth generation of her family to serve in the Armed Forces, will complete the distance from the gym at RAF High Wycombe. She said: “I really love what the Royal Star &amp; Garter charity stands for and what they do. I like the fact that they’ll be there for me in the future if ever I need them. “I know it’s going to get harder during the challenge as I tire, and I imagine there will be a few tears “I know I’ll suffer and be in pain, but I’ll have a lot of support, and I’ll keep reminding myself of the end goal and why I’m doing it, so I’m confident I will complete it.” ■ Go to: gofund.me/ca555b7e to sponsor SAC Webster.