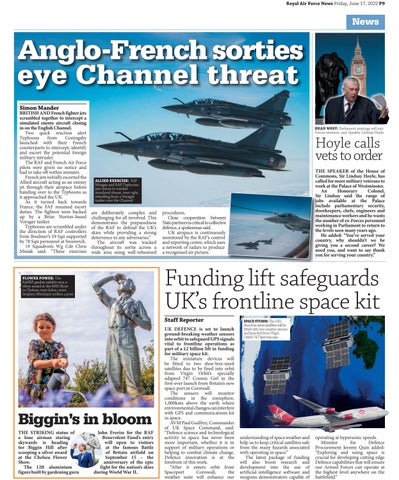 BRITISH AND French fighter jets scrambled together to intercept a simulated enemy aircraft closing in on the English Channel. Two quick reaction alert Typhoons from Coningsby launched with their French counterparts to intercept, identify and escort the potential foreign military intruder. The RAF and French Air Force pilots were given no notice and had to take off within minutes. French jets initially escorted the Allied aircraft acting as an enemy jet through their airspace before handing over to the Typhoons as it approached the UK. As it turned back towards France, the FAF resumed escort duties. The fighters were backed up by a Brize Norton-based Voyager tanker. Typhoons are scrambled under the direction of RAF controllers from Boulmer’s 19 Sqn supported by 78 Sqn personnel at Swanwick. 19 Squadron’s Wg Cdr Chris Misiak said: “These exercises

are deliberately complex and challenging for all involved. This demonstrates the preparedness of the RAF to defend the UK’s skies while providing a strong deterrence to any adversaries.” The aircraft was tracked throughout its sortie across a wide area using well-rehearsed

procedures. Close cooperation between Nato partners is critical to collective defence, a spokesman said. UK airspace is continuously monitored by the RAF’s control and reporting centre, which uses a network of radars to produce a recognised air picture.

Biggin’s in bloom THE STRIKING statue of a lone airman staring skywards is heading for Biggin Hill after scooping a silver award at the Chelsea Flower Show. The 12ft aluminium figure built by gardening guru

THE SPEAKER of the House of Commons, Sir Lindsay Hoyle, has called for more military veterans to work at the Palace of Westminster. An Honorary Colonel, Sir Lindsay said the range of jobs available at the Palace include parliamentary security, doorkeepers, chefs, engineers and maintenance workers and he wants the number of ex-Forces personnel working in Parliament to return to the levels seen many years ago. He added: “You’ve served your country, why shouldn’t we be giving you a second career? We need you, and want to say thank you for serving your country.”

John Everiss for the RAF Benevolent Fund’s entry will open to visitors at the famous Battle of Britain airfield on September 15 – the anniversary of the epic fight for the nation’s skies during World War II.

UK DEFENCE is set to launch ground-breaking weather sensors into orbit to safeguard GPS signals vital to frontline operations as part of a £2 billion lift in funding for military space kit. The miniature devices will be fitted to two shoe-box-sized satellites due to be fired into orbit from Virgin Orbit’s specially adapted 747 Cosmic Girl in the first-ever launch from Britain’s new space port in Cornwall. The sensors will monitor conditions in the ionisphere, 1,000kms above the earth where environmental changes can interfere with GPS and communications kit in space. AVM Paul Godfrey, Commander of UK Space Command, said: “Defence science and technological activity in space has never been more important, whether it is in support of military operations or helping to combat climate change, Defence innovation is at the forefront of this work. “After it enters orbit from Spaceport Cornwall, the weather suite will enhance our

SPACE STORM: The UK’s shoe-box-sized satellites will be fitted with new weather sensors and launched from Virgin Orbit’s 747 later this year

understanding of space weather and help us to keep critical satellites safe from the many hazards associated with operating in space.” The latest package of funding will also boost research and development into the use of artificial intelligence software and weapons demonstrators capable of

operating at hypersonic speeds. Minister for Defence Procurement Jeremy Quin added: “Exploring and using space is crucial for developing cutting edge Defence capabilities that will ensure our Armed Forces can operate at the highest level anywhere on the battlefield.”