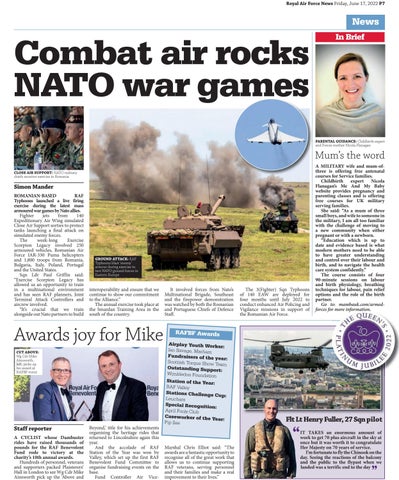 interoperability and ensure that we continue to show our commitment to the Alliance.” The annual exercise took place at the Smardan Training Area in the south of the country.

Staff reporter A CYCLIST whose Dambuster rides have raised thousands of pounds for the RAF Benevolent Fund rode to victory at the charity’s 10th annual awards. Hundreds of personnel, veterans and supporters packed Plaisterers’ Hall in London to see Wg Cdr Mike Ainsworth pick up the ‘Above and

Beyond,’ title for his achievements organising the heritage rides that returned to Lincolnshire again this year. And the accolade of RAF Station of the Year was won by Valley, which set up the first RAF Benevolent Fund Committee to organise fundraising events on the base. Fund Controller Air Vice-

It involved forces from Nato’s Multinational Brigade, Southeast and the firepower demonstration was watched by both the Romanian and Portuguese Chiefs of Defence Staff.

The 3(Fighter) Sqn Typhoons of 140 EAW are deployed for four months until July 2022 to conduct enhanced Air Policing and Vigilance missions in support of the Romanian Air Force.

A MILITARY wife and mum-ofthree is offering free antenatal courses for Service families. Childbirth expert Nicola Flanagan’s Me And My Baby website provides pregnancy and parenting classes and is offering free courses for UK military serving families. She said: “As a mum of three small boys, and wife to someone in the military, I am all too familiar with the challenge of moving to a new community when either pregnant or with a newborn. “Education which is up to date and evidence based is what modern mothers need to be able to have greater understanding and control over their labour and birth, and to navigate the health care system confidently.” The course consists of four 90-minute sessions on labour and birth physiology, breathing techniques for labour, pain relief options and the role of the birth partner. Go to: mambauk.com/armedforces for more information.

Marshal Chris Elliot said: “The awards are a fantastic opportunity to recognise all of the great work that allows us to continue supporting RAF veterans, serving personnel and their families and make a real improvement to their lives.”

IT TAKES an enormous amount of work to get 70 plus aircraft in the sky at once but it was worth it to congratulate Her Majesty on 70 years of service. I’m fortunate to fly the Chinook on the day. Seeing the reactions of the balcony and the public to the flypast when we landed was a terrific end to the day