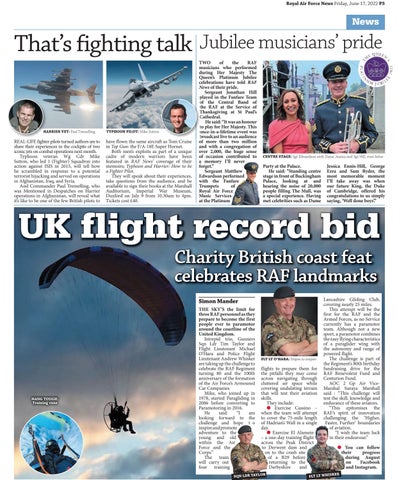 REAL-LIFE fighter pilots turned authors are to share their experiences in the cockpits of two iconic jets on combat operations next month. Typhoon veteran Wg Cdr Mike Sutton, who led 1 (Fighter) Squadron into action against ISIS in 2015, will tell how he scrambled in response to a potential terrorist hijacking and served on operations in Afghanistan, Iraq, and Syria. And Commander Paul Tremelling, who was Mentioned in Despatches on Harrier operations in Afghanistan, will reveal what it’s like to be one of the few British pilots to

have flown the same aircraft as Tom Cruise in Top Gun: the F/A-18E Super Hornet. Both men’s exploits as part of a unique cadre of modern warriors have been featured in RAF News’ coverage of their memoirs; Typhoon and Harrier: How to be a Fighter Pilot. They will speak about their experiences, take questions from the audience, and be available to sign their books at the Marshall Auditorium, Imperial War Museum, Duxford on July 9 from 10.30am to 4pm. Tickets cost £40.

TWO of the RAF musicians who performed during Her Majesty The Queen’s Platinum Jubilee celebrations have told RAF News of their pride. Sergeant Jonathan Hill played in the Fanfare Team of the Central Band of the RAF at the Service of Thanksgiving at St Paul’s Cathedral. He said: “It was an honour to play for Her Majesty. This once-in-a-lifetime event was broadcast live to an audience of more than two million and with a congregation of over 2,000, the huge sense of occasion contributed to a memory I’ll never forget.” Sergeant Matthew Edwardson performed with the Fanfare Trumpets of Royal Air Force Music Services at the Platinum

Party at the Palace. He said: “Standing centre stage in front of Buckingham Palace, looking at and hearing the noise of 20,000 people filling The Mall, was a special experience. Having met celebrities such as Dame

Jessica Ennis-Hill, George Ezra and Sam Ryder, the most memorable moment I’ll take away was when our future King, the Duke of Cambridge, offered his congratulations to us simply saying, ‘Well done boys’.”

THE SKY’S the limit for three RAF personnel as they prepare to become the first people ever to paramotor around the coastline of the United Kingdom. Intrepid trio, Gunners Sqn Ldr Tim Taylor and Flight Lieutenant Michael O’Hara and Police Flight Lieutenant Andrew Whisker are taking up the challenge to celebrate the RAF Regiment turning 80 and the 100th anniversary of the formation of the Air Force’s Armoured Car Companies Mike, who joined up in 1978, started Paragliding in 2006 before converting to Paramotoring in 2016. He said: “I am looking forward to the challenge and hope t o inspire and promote adventure to the young and old within the Air Force and the Corps.” The team will carry out four training

flights to prepare them for the pitfalls they may come across navigating through cluttered air space while covering undulating terrain that will test their aviation skills. They include: l Exercise Cassino – when the team will attempt to cover the 75-mile length of Hadrian’s Wall in a single day. l Exercise El Alamein – a one-day training flight across the Peak District to Derwent dam and on to the crash site of a B29 before returning to the Derbyshire and

Lancashire Gliding Club, covering nearly 25 miles. This attempt will be the first for the RAF and the Armed Forces, as no Service currently has a paramotor team. Although not a new sport, a paramotor combines the easy flying characteristics of a paraglider wing with the autonomy and range of powered flight. The challenge is part of the Regiment’s 80th birthday fundraising drive for the RAF Benevolent Fund and Centurion Fund. AOC 2 Gp Air ViceMarshal Suraya Marshall said : “This challenge will test the skill, knowledge and endurance of these aviators. “This epitomises the RAF’s spirit of innovation challenging the ‘Higher, Faster, Further’ boundaries of aviation. “I wish the team luck in their endeavour.”