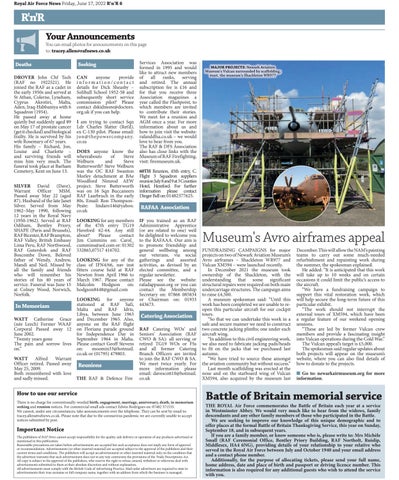 DROVER John Chf Tech (RAF no 1922521). He joined the RAF as a cadet in the early 1950s and served at St Athan, Colerne, Lyneham, Cyprus Akrotiri, Malta, Aden, Iraq-Habbaniya with 6 Squadron (1954). He passed away at home quietly but suddenly aged 89 on May 17 of prostate cancer (get it checked) and biological frailty. He is survived by his wife Rosemary of 67 years. His family – Richard, Jon, Louise and Charlotte – and surviving friends will miss him very much. The funeral took place at Barham Cemetery, Kent on June 13.

SILVER David (Dave), Warrant Officer MSM. Passed away May 22 (aged 87). Husband of the late Janet Silver. Served from May 1962–May 1990, following 12 years in the Royal Navy (1950-1962). Served at RAF Odiham, Bentley Priory, SHAPE (Paris and Brussels), RAF Bicester, RAF Brampton, RAF Valley, British Embassy Lima Peru, RAF Northwood, RAF Gutersloh and RAF Boscombe Down. Beloved father of Wendy, Andrew, Mandi and Neil. Missed by all the family and friends who will remember his stories of his 40 years of service. Funeral was June 15 at Colney Wood, Norwich, Norfolk.

I am trying to contact Sqn Ldr Charles Slatter (Ret’d), ex C-130 pilot. Please email: j on @ t he p owe rc omp any. co.za DOES anyone know the whereabouts of Steve Welburn and Steve Butterworth? Steve Welburn was the OC RAF Swanton Morley detachment at BAe Woodford Nimrod AEW project. Steve Butterworth was on 16 Sqn Buccaneers RAF Laarbruch in the early 80s. Email: Ron ThompsonPeate: lindaro146@yahoo. co.uk LOOKING for any members of the 47th entry TG19 Hereford 62-64. Any still about? Please contact Jim Cummins on: Carol_ cummins@aol.com or: 01302 532865,07517 416702. LOOKING for any of the class of IFN4/66, nav inst fitters course held at RAF Newton from April 1966 to March 1967. Please contact Malcolm Hodgson on: hodgson8448@gmail.com LOOKING for anyone stationed at RAF Safi, Malta and RAF Idris, Libya, between June 1963 and December 1965. Also, anyone on the RAF flight on Floriana parade ground for Independence Day in September 1964 in Malta. Please contact Geoff Stevens on: moomin33@hotmail. co.uk or (01795) 479803.

Services Association was formed in 1995 and would like to attract new members of all ranks, serving and retired. The annual subscription fee is £16 and for that you receive three Association magazines a year called the Flashpoint, to which members are invited to contribute their stories. We meet for a reunion and AGM once a year. For more information about us and how to join visit the website: rafanddfsa.co.uk – we would love to hear from you. The RAF &amp; DFS Association also has close links with the Museum of RAF Firefighting, visit: firemuseum.uk.

RAFAA Association IF you trained as an RAF Administrative Apprentice (or are related to one) we’d be delighted to welcome you to the RAFAAA. Our aim is to promote friendship and general wellbeing among our veterans, via social gatherings and assorted activities, as devised by an elected committee, and a regular newsletter. Please see the website: rafadappassn.org or you can contact the Membership Secretary on: 07866 085834 or Chairman on: 01933 443673.

How to use our service There is no charge for conventionally-worded birth, engagement, marriage, anniversary, death, in memoriam seeking and reunion notices. For commercial small ads contact Edwin Rodrigues on: 07482 571535. We cannot, under any circumstances, take announcements over the telephone. They can be sent by email to: tracey.allen@rafnews.co.uk. Please note that due to the coronavirus pandemic we are currently unable to accept notices submitted by post.

Important Notice The publishers of RAF News cannot accept responsibility for the quality, safe delivery or operation of any products advertised or mentioned in this publication. Reasonable precautions are taken before advertisements are accepted but such acceptance does not imply any form of approval or recommendation. Advertisements (or other inserted material) are accepted subject to the approval of the publishers and their current terms and conditions. The publishers will accept an advertisement or other inserted material only on the condition that the advertiser warrants that such advertisement does not in any way contravene the provisions of the Trade Descriptions Act. All copy is subject to the approval of the publishers, who reserve the right to refuse, amend, withdraw or otherwise deal with advertisements submitted to them at their absolute discretion and without explanation. All advertisements must comply with the British Code of Advertising Practice. Mail order advertisers are required to state in advertisements their true surname or full company name, together with an address from which the business is managed.

Museum&#39;s Avro airframes appeal FUNDRAISING CAMPAIGNS for major projects on two of Newark Aviation Museum’s Avro airframes – Shackleton WR977 and Vulcan XM594 – were launched recently. In December 2021 the museum took ownership of the Shackleton, with the understanding that some significant structural repairs were required on both main undercarriage structures. The campaign aims to raise £4,500. A museum spokesman said: “Until this work has been completed we are unable to reopen this particular aircraft for our cockpit tours. “So that we can undertake this work in a safe and secure manner we need to construct two concrete jacking plinths; one under each aircraft wing. “In addition to this civil engineering work, we also need to fabricate jacking pads/heads to fit on the jacks that we purchased last autumn. “We have tried to source these amongst the aviation community but without success.” Last month scaffolding was erected at the nose and on the starboard wing of Vulcan XM594, also acquired by the museum last

December. This will allow the NAM’s painting teams to carry out some much-needed refurbishment and repainting work during the summer, the spokesman explained. He added: “It is anticipated that this work will take up to 10 weeks and on certain occasions it could limit the public’s access to the aircraft. “We have a fundraising campaign to support this vital restoration work, which will help secure the long-term future of this particular exhibit. “The work should not interrupt the external tours of XM594, which have been a regular feature of our weekend opening sessions. “These are led by former Vulcan crew members and provide a fascinating insight into Vulcan operations during the Cold War.” The Vulcan appeal’s target is £5,000. The spokesman said regular updates about both projects will appear on the museum’s website, where you can also find details of how to donate to the projects. n Go to: newarkairmuseum.org for more information.

THE ROYAL Air Force commemorates the Battle of Britain each year at a service in Westminster Abbey. We would very much like to hear from the widows, family descendants and any other family members of those who participated in the Battle. We are seeking to improve our knowledge of this unique demographic and to offer places at the formal Battle of Britain Thanksgiving Service, this year on Sunday, September 18, and in subsequent years. If you are a family member, or know someone who is, please write to: Mrs Michèle Small (RAF Ceremonial Office, Bentley Priory Building, RAF Northolt, Ruislip, Middlesex, HA4 6NG), providing details of your relationship to your relative who served in the Royal Air Force between July and October 1940 and your email address and a contact phone number. Additionally, for the purpose of allocating tickets, please send your full name, home address, date and place of birth and passport or driving licence number. This information is also required for any additional guests who wish to attend the service with you.