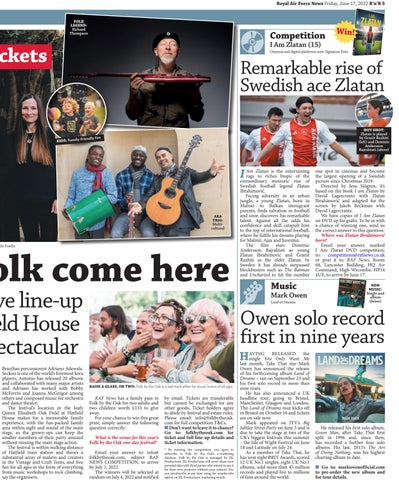 Brazilian percussionist Adriano Adewale. Seckou is one of the world’s foremost kora players, Antonio has released 20 albums and collaborated with many major artists and Adriano has worked with Bobby McFerrin and Joanna McGregor among others and composed music for orchestra and dance theatre. The festival’s location in the leafy Queen Elizabeth Oak Field at Hatfield House makes for a memorable family experience, with the fun-packed family area within sight and sound of the main stage, so the grown-ups can keep the smaller members of their party amused without missing the main stage action. The festival is within walking distance of Hatfield train station and there’s a substantial array of makers and creators in the Vintage and Craft Tents, and free fun for all ages in the form of everything from music workshops to rock climbing, say the organisers.

Am Zlatan is the entertaining rags to riches biopic of the extraordinary meteoric rise of Swedish football legend Zlatan Ibrahimović. Facing adversity in an urban jungle, a young Zlatan, born in Malmö to Balkan immigrant parents, finds salvation in football and soon discovers his remarkable talent. Against all the odds his confidence and skill catapult him to the top of international football, where he fulfils his dreams playing for Malmö, Ajax and Juventus. The film stars Dominic Andersson Bajraktati as young Zlatan Ibrahimović and Granit Rushiti as the older Zlatan. In Sweden it has already surpassed blockbusters such as The Batman and Uncharted to hit the number

one spot in cinemas and become the largest opening of a Swedish picture since Christmas 2019. Directed by Jens Sjögren, it’s based on the book I am Zlatan by David Lagercrantz with Zlatan Ibrahimović and adapted for the screen by Jakob Beckman with David Lagercrantz. We have copies of I Am Zlatan on DVD up for grabs. To be in with a chance of winning one, send us the correct answer to this question: Where was Zlatan Ibrahimović born? Email your answer, marked I Am Zlatan DVD competition, to: competitions@rafnews.co.uk or post it to: RAF News, Room 68, Lancaster Building, HQ Air Command, High Wycombe, HP14 4UE, to arrive by June 17. NEW MUSIC: Single and album (below)

H RAISE A GLASS, OR TWO: Folk by the Oak is a laid-back affair for music lovers of all ages

RAF News has a family pass to Folk by the Oak for two adults and two children worth £133 to give away. For your chance to win this great prize, simply answer the following question correctly: What is the venue for this year’s Folk by the Oak one-day festival?

by email. Tickets are transferable but cannot be exchanged for any other goods. Ticket holders agree to abide by festival and estate rules. Please email: info@folkbytheoak. com for full competition T&amp;Cs. n Don’t want to leave it to chance? Go to: folkbytheoak.com for ticket and full line-up details and ticket information.

Email your answer to: info@ folkbytheoak.com, subject RAF NEWS COMPETITION, to arrive by July 1, 2022. The winners will be selected at random on July 4, 2022 and notified

AVING RELEASED the single You Only Want Me last month, Take That star Mark Owen has announced the release of his forthcoming album Land of Dreams – out on September 23 and his first solo record in more than nine years. He has also announced a UK headline tour, going to Bristol, Manchester, Glasgow and London. The Land of Dreams tour kicks off in Bristol on October 16 and tickets are on sale now. Mark appeared on ITV’s Big Jubilee Street Party on June 5 and is due to take the stage at two of the UK’s biggest festivals this summer – the Isle of Wight Festival on June 18 and Latitude on July 24. As a member of Take That, he has won eight BRIT Awards, scored 12 UK No.1 singles, eight UK No.1 albums, sold more than 45 million records and played live to millions of fans around the world.

He released his first solo album, Green Man, after Take That first split in 1996 and, since then, has recorded a further four solo albums. His last, 2013’s The Art of Doing Nothing, was his highest charting album to date. n Go to: markowenofficial.com to pre-order the new album and for tour details.