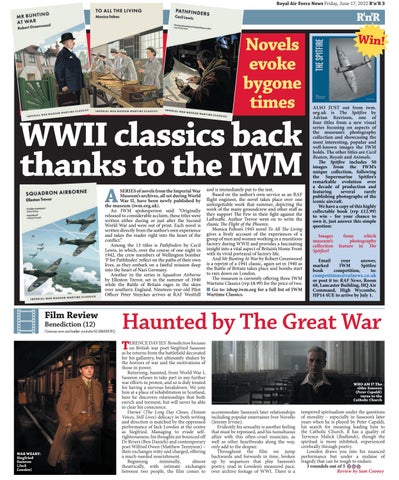 WWII classics back thanks to the IWM A

SERIES of novels from the Imperial War Museum’s archives, all set during World War II, have been newly published by the museum (iwm.org.uk). An IWM spokesperson said: “Originally released to considerable acclaim, these titles were written either during or just after the Second World War and were out of print. Each novel is written directly from the author’s own experience and takes the reader right into the heart of the conflict.” Among the 13 titles is Pathfinders by Cecil Lewis, in which, over the course of one night in 1942, the crew members of Wellington bomber ‘P for Pathfinder’ reflect on the paths of their own lives, as they embark on a fateful mission deep into the heart of Nazi Germany. Another in the series is Squadron Airborne by Elleston Trevor, set in the summer of 1940 while the Battle of Britain rages in the skies over southern England. Nineteen-year-old Pilot Officer Peter Stuyckes arrives at RAF Westhill

and is immediately put to the test. Based on the author’s own service as an RAF flight engineer, the novel takes place over one unforgettable week that summer, depicting the work of the many groundcrew and other staff as they support The Few in their fight against the Luftwaffe. Author Trevor went on to write the classic The Flight of the Phoenix. Monica Felton’s 1945 novel To All The Living gives a lively account of the experiences of a group of men and women working in a munitions factory during WWII and provides a fascinating insight into a vital aspect of Britain’s Home Front with its vivid portrayal of factory life. And Mr Bunting At War by Robert Greenwood is a reprint of a 1941 classic, again set in 1940 as the Battle of Britain takes place and bombs start to rain down on London. The museum is currently offering three IWM Wartime Classics (rrp £8.99) for the price of two. n Go to: ishop.iwm.org for a full list of IWM Wartime Classics.

ALSO JUST out from iwm. org.uk is The Spitfire by Adrian Kerrison, one of four titles from a new visual series focusing on aspects of the museum’s photography collection and showcasing the most interesting, popular and well-known images the IWM holds. The other titles are Cecil Beaton, Royals and Animals. The Spitfire includes 50 images from the IWM’s unique collection, following the Supermarine Spitfire’s remarkable evolution over a decade of production and featuring several rarely publishing photographs of the iconic aircraft. We have a copy of this highly collectable book (rrp £12.99) to win – for your chance to own it, just answer this simple question: Images museum’s collection Spitfire?

from which photography feature in The

Haunted by The Great War T

ERENCE DAVIES’ Benediction focuses on British war poet Siegfried Sassoon as he returns from the battlefield decorated for his gallantry, but ultimately shaken by the horrors of war and the motivations of those in power. Returning, haunted, from World War I, Sassoon refuses to take part in any further war efforts in protest, and so is duly treated for having a nervous breakdown. We join him at a place of rehabilitation in Scotland, here he discovers relationships that both enrich and torment, but will never be able to clear his conscience. Davies’ (The Long Day Closes, Distant Voices, Still Lives) delicacy in both writing and direction is matched by the oppressed performance of Jack Lowden at the centre as Siegfried. Managing to evade selfrighteousness, his thoughts are bounced off Dr Rivers (Ben Daniels) and contemporary poet Wilfred Owen (Matthew Tennyson) – their exchanges witty and charged, offering a much-needed nourishment. Beginning minimally, almost theatrically, with intimate exchanges between two people, the film comes to

WHO AM I? The older Sassoon (Peter Capaldi) turns to the Catholic Church

accommodate Sassoon’s later relationships including popular entertainer Ivor Novello (Jeremy Irvine). Evidently his sexuality is another feeling that must be repressed, and his tumultuous affair with this often-cruel musician, as well as other heartbreaks along the way, only add to the despair. Throughout the film we jump backwards and forwards in time, broken up by sequences that play Sassoon’s poetry, read in Lowden’s measured pace, over archive footage of WWI. There is a

tempered spiritualism under the questions of morality – especially in Sassoon’s later years when he is played by Peter Capaldi, his search for meaning leading him to the Catholic Church. It has a quality of Terrence Malick (Badlands), though the spiritual is more inhibited, experienced cerebrally through poetry. Lowden draws you into his nuanced performance but under a malaise of tragedy that can be tough to endure. 3 roundels out of 5 Review by Sam Cooney