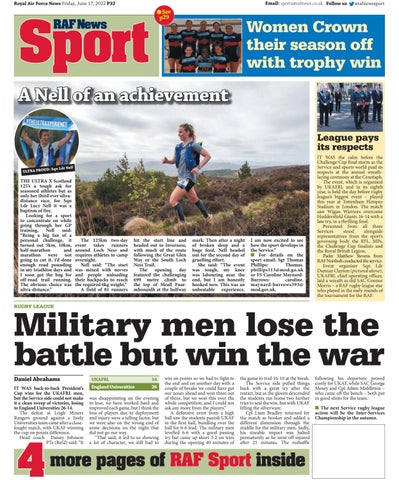 Women Crown their season off with trophy win

A Nell of an achievement League pays its respects : ULTR A PROUD

THE ULTRA X Scotland 125’s a tough ask for seasoned athletes but as only her third ever ultradistance race, for Sqn Ldr Lucy Nell it was a baptism of fire. Looking for a sport to concentrate on while going through her GP training, Nell said: “Being a big fan of a personal challenge, it turned out 5km, 10km, half-marathon and marathon were not going to cut it. I’d done enough road pounding in my triathlon days and I soon got the bug for off-road trail running. The obvious choice was ultra-distance.”

The 125km two-day event takes runners around Loch Ness and requires athletes to camp overnight. Nell said: “The start was mixed with nerves and people unloading their backpacks to reach the required 6kg weight.” A field of 81 runners

hit the start line and headed out to Inverness, with much of the route following the Great Glen Way or the South Loch Ness Trail. The opening day featured the challenging 699 metre climb to the top of Meall Fuarmhonaidh at the halfway

mark. Then after a night of broken sleep and a huge feed, Nell headed out for the second day of gruelling effort. She said: “The event was tough, my knee was labouring near the end, but I am honestly hooked now. This was an unbeatable experience.

I am now excited to see how the sport develops in the Service.” n For details on the sport email: Sgt Thomas Phillips: Thomas. phillips113@mod.go.uk or FS Caroline MaynardBurrows: caroline. maynard-burrows393@ mod.gov.uk.

IT WAS the calm before the Challenge Cup final storm as the Service and sports world paid its respects at the annual wreathlaying ceremony at the Cenotaph. The event, which is organised by UKAFRL and in its eighth year, is held the day before rugby league’s biggest event – played this year at Tottenham Hotspur Stadium in London. The match saw Wigan Warriors overcome Huddersfield Giants 16-14 with a late try, in a thrilling final. Personnel from all three Services stood alongside representatives from the sport’s governing body the RFL, MPs, the Challenge Cup finalists and the Royal British Legion. Padre Matthew Stevens from RAF Northolt conducted the service. Event organiser Sqn Ldr Damian Clayton (pictured above), UKAFRL chief operating officer, laid a wreath as did SAC Connor Morris – a RAF rugby league star who played in the early rounds of the tournament for the RAF.

Military men lose the battle but win the war Daniel Abrahams IT WAS back-to-back President’s Cup wins for the UKAFRL men, but the Service side could not make it a clean sweep of victories, losing to England Universities 26-14. The defeat at Leigh Miners Rangers ground against a lively Universities team came after a closefought match, with UKAF winning the cup on points difference. Head coach Danny Johnson PTe (Ret’d) said: “It

was disappointing on the evening to lose, we have worked hard and improved each game, but I think the loss of players due to deployment and injury were a telling factor, but we were also on the wrong end of some decisions on the night that did not go our way. “That said, it led to us showing a lot of character, we still had to

win on points so we had to fight to the end and on another day with a couple of breaks we could have got our noses ahead and won three out of three, but we won this over the whole competition, and I could not ask any more from the players.” A defensive error from a high ball saw the students punish UKAF in the first half, bundling over the ball for 0-6 lead. The military men levelled 6-6 with a good passing try but came up short 3-2 on tries during the opening 40 minutes of

the game to trail 16-10 at the break. The Service side pulled things back with a great try after the restart, but as the gloom descended the students ran home two further tries to seal the win, but with UKAF lifting the silverware. Cpl Liam Bradley returned for the match as hooker and added a different dimension through the middle for the military men. Sadly, his sizeable impact was halted prematurely as he went off injured after 25 minutes. The reshuffle

more pages of RAF Sport inside

following his departure proved costly for UKAF, while SAC George Mosey and Cpl Adam Middleton – who came off the bench – both put in good stints for the team. n The next Service rugby league action will be the Inter-Services Championship in the autumn.