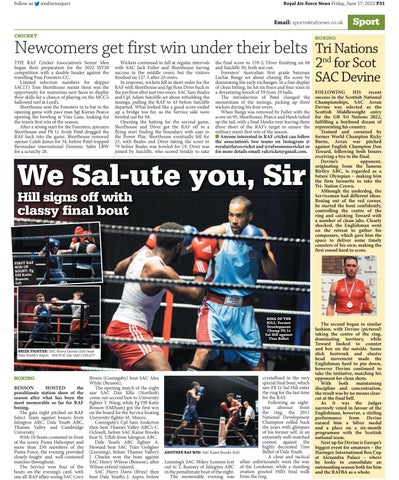 Newcomers get first win under their belts THE RAF Cricket Association’s Senior Men began their preparation for the 2022 IST20 competition with a double header against the travelling Free Foresters CC. Limited selection numbers for skipper SAC(T) Tom Shorthouse meant there was the opportunity for numerous new faces to display their skills for a chance of playing on the MCC’s hallowed turf at Lord’s. Shorthouse sent the Foresters in to bat in the opening game with pace man Sgt Kieran Pearce opening the bowling at Vine Lane, looking for the team’s first win of the season. After a strong start for the Foresters, spinners Shorthouse and Flt Lt Avish Patel dragged the RAF back into the game. Shorthouse removed opener Caleb James for 34, before Patel trapped Bermudan international Dominic Sabir LBW for a scratchy 28.

Wickets continued to fall at regular intervals with SAC Jack Fuller and Shorthouse having success in the middle overs, but the visitors finished on 127-5 after 20 overs. In response, wickets fell in short order for the RAF with Shorthouse and Sgt Ross Diver back in the pavilion after just two overs. SAC Sam Beales and Cpl Adam Sutcliffe set about rebuilding the innings, pulling the RAF to 43 before Sutcliffe departed. What looked like a good score ended up a bridge too far, as the Service side were bowled out for 94. Opening the batting for the second game, Shorthouse and Diver got the RAF off to a flying start finding the boundary with ease in the Power Play. Shorthouse eventually fell for 23, with Beales and Diver taking the score to 79 before Beales was bowled for 19. Diver was joined by Sutcliffe, who scored briskly to take

the final score to 159-2; Diver finishing on 84 and Sutcliffe 30, both not out. Foresters’ Australian first grade batsman Lachie Bangs set about chasing the score by dominating the early exchanges. In a fine display of clean hitting, he hit six fours and four sixes in a devastating knock of 59 from 29 balls. The introduction of Patel changed the momentum of the innings, picking up three wickets during his four overs. When Bangs was removed by Fuller with the score on 95, Shorthouse, Pearce and Hawk tidied up the tail, with a final Hawks over leaving them three short of the RAF’s target to ensure the military men’s first win of the season. n Anyone interested in RAF cricket can follow the association’s two teams on Instagram @ royalairforcecricket and @rafwomenscricket or for more details email: rafcricket@gmail.com.

We Sal-ute you, Sir Hill signs off with classy final bout

Tri Nations 2nd for Scot SAC Devine FOLLOWING HIS recent success in the Scottish National Championships, SAC Arran Devine was selected as the Scottish Middleweight entry for the GB Tri Nations 2022, fulfilling a boyhood dream of representing his country. Trained and cornered by former World Champion Ricky Burns, Arran was pitched against English Champion Dan Toward, following both boxers receiving a bye to the final. Devine’s opponent, originating from the famous Birtley ABC, is regarded as a future Olympian – making him the firm favourite to take the Tri- Nation Crown. Although the underdog, the Serviceman had different ideas. Boxing out of the red corner, he started the bout confidently, controlling the centre of the ring and catching Toward with a number of clean jabs. Clearly shocked, the Englishman went on the retreat to gather his composure, which gave him the space to deliver some timely counters of his own; making the first round hard to score.

BOXING BENSON HOSTED the penultimate station show of the season after what has been the most memorable so far for RAF boxing. The gala night pitched an RAF Select Team against boxers from Islington ABC, Dale Youth ABC, Thames Valley and Cambridge University. With 10 bouts contested in front of the iconic Puma Helicopter and more than 250 members of the Puma Force, the evening provided closely-fought and well-contested matches throughout. The Service won four of the bouts on the evening’s card, with one all-RAF affair seeing SAC Cory

crystallised in the very special final bout, which saw Flt Lt Sal Hill enter the ring for the last time for the RAF. Following an eightyear absence from the ring, the 2011 National Development Champion rolled back the years with glimpses of his former self, in an extremely well-matched contest against the highly decorated Tino Bellot of Dale Youth. ANOTHER RAF WIN: SAC Kaine Brooks (left) A close and tactical Leeming’s SAC Mikey Lennon lost affair unfortunately went the way out to T. Ramsey of Islington ABC of the Londoner, while a standing in the penultimate bout of the night. ovation greeted Hill’s final walk The memorable evening was from the ring.

The second began in similar fashion, with Devine (pictured) taking the centre of the ring, dominating territory, while Toward looked to counter and box on the outside. Some slick footwork and elusive head movement made the Englishman hard to pin down, however Devine continued to take the initiative, matching his opponent for clean shots. With both maintaining discipline and concentration, the result was by no means clearcut at the final bell. As it was the judges narrowly voted in favour of the Englishman, however, a stirling performance from Devine earned him a Silver medal and a place on a six-month programme with the Scottish national team. Next up for Devine is Europe’s biggest event for amateurs – the Haringey International Box Cup at Alexandra Palace – where he looks to consolidate an outstanding season both for him and the RAFBA as a whole.