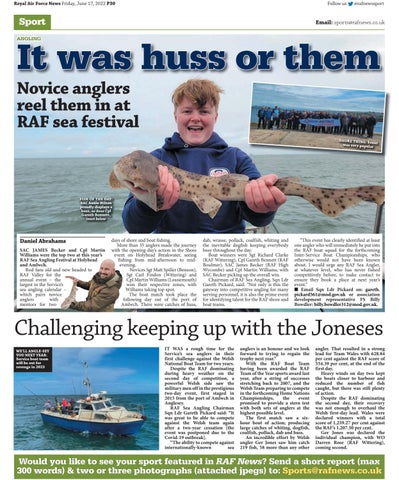 It was huss or them ANGLING

FISH OF THE DAY: SAC Annie Hilton proudly displays a huss, as does Cpl Gareth Bennett, inset below

Daniel Abrahams SAC JAMES Becker and Cpl Martin Williams were the top two at this year’s RAF Sea Angling Festival at Holyhead and Amlwch. Rod fans old and new headed to RAF Valley for the annual event – the largest in the Service’s sea angling calendar – which pairs novice anglers with mentors for two

days of shore and boat fishing. More than 35 anglers made the journey with the opening day’s action in the Shore event on Holyhead Breakwater, seeing fishing from mid-afternoon to midevening. Novices Sgt Matt Spiller (Benson), Sgt Carl Findon (Wittering) and Cpl Martin Williams (Lossiemouth) won their respective zones, with Williams taking top spot. The boat match took place the following day out of the port of Amlwch. There were catches of huss,

dab, wrasse, pollack, coalfish, whiting and the inevitable dogfish keeping everybody busy throughout the day. Boat winners were Sgt Richard Clarke (RAF Wittering), Cpl Gareth Bennett (RAF Boulmer), SAC James Becker (RAF High Wycombe) and Cpl Martin Williams, with SAC Becker picking up the overall win. Chairman of RAF Sea Angling, Sqn Ldr Gareth Pickard, said: “Not only is this the gateway into competitive angling for many serving personnel, it is also the prime event for identifying talent for the RAF shore and boat teams.

“This event has clearly identified at least one angler who will immediately be put into the RAF boat squad for the forthcoming Inter-Service Boat Championships, who otherwise would not have been known about. I would urge any RAF Sea Angler, at whatever level, who has never fished competitively before, to make contact to ensure they book a place at next year’s event.” n Email Sqn Ldr Pickard on: gareth. pickard561@mod.gov.uk or association development representative FS Billy Bowdler: billy.bowdler312@mod.gov.uk.

Challenging keeping up with the Joneses WE&#39;LL ANGLE-SEY YOU NEXT YEAR: Service boat team will be out for revenge in 2023

IT WAS a rough time for the Service’s sea anglers in their first challenge against the Welsh National Boat Team for two years. Despite the RAF dominating during heavy weather on the second day of competition, a powerful Welsh side saw the military men off in the prestigious two-day event, first staged in 2015 from the port of Amlwch in Anglesey. RAF Sea Angling Chairman Sqn Ldr Gareth Pickard said: “It was great to be able to compete against the Welsh team again after a two-year cessation [the event was postponed due to the Covid-19 outbreak]. “The ability to compete against internationally-known sea

anglers is an honour and we look forward to trying to regain the trophy next year.” With the RAF Boat Team having been awarded the RAF Team of the Year sports award last year, after a string of successes stretching back to 2007, and the Welsh Team preparing to compete in the forthcoming Home Nations Championships, the event promised to provide a stern test with both sets of anglers at the highest possible level. The first match saw a sixhour bout of action; producing large catches of whiting, dogfish, coalfish, pollack, dab and huss. An incredible effort by Welsh angler Ger Jones saw him catch 219 fish, 58 more than any other

angler. That resulted in a strong lead for Team Wales with 628.84 per cent against the RAF score of 554.39 per cent, at the end of the first day. Heavy winds on day two kept the boats closer to harbour and reduced the number of fish caught, but there was still plenty of action. Despite the RAF dominating the second day, their recovery was not enough to overhaul the Welsh first-day lead. Wales were declared winners with a total score of 1,259.27 per cent against the RAF’s 1,207.50 per cent. Ger Jones was declared the individual champion, with WO Darren Rose (RAF Wittering), coming second.