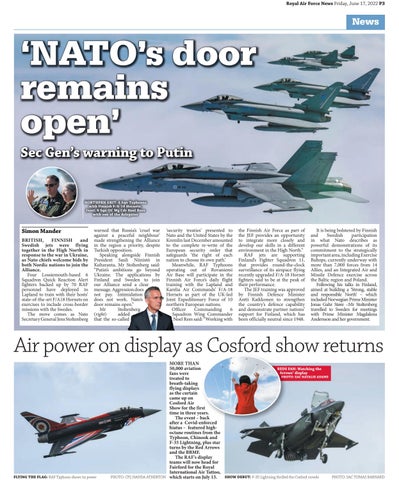 Simon Mander BRITISH, FINNISH and Swedish jets were flying together in the High North in response to the war in Ukraine, as Nato chiefs welcome bids by both Nordic nations to join the Alliance. Four Lossiemouth-based 6 Squadron Quick Reaction Alert fighters backed up by 70 RAF personnel have deployed to Lapland to train with their hosts’ state-of-the-art F/A18 Hornets on exercises to include cross-border missions with the Swedes. The move comes as Nato Secretary General Jens Stoltenberg

warned that Russia’s ‘cruel war against a peaceful neighbour’ made strengthening the Alliance in the region a priority, despite Turkish opposition. Speaking alongside Finnish President Sauli Niinistö in Kultaranta, Mr Stoltenberg said: “Putin’s ambitions go beyond Ukraine. The applications by Finland and Sweden to join our Alliance send a clear message. Aggression does not pay. Intimidation does not work. Nato’s door remains open.” Mr Stoltenberg (right) added that the so-called

‘security treaties’ presented to Nato and the United States by the Kremlin last December amounted to the complete re-write of the European security order that safeguards ‘the right of each nation to choose its own path.’ Meanwhile, RAF Typhoons operating out of Rovaniemi Air Base will participate in the Finnish Air Force’s daily flight training with the Lapland and Karelia Air Commands’ F/A-18 Hornets as part of the UK-led Joint Expeditionary Force of 10 northern European nations. Officer Commanding 6 Squadron Wing Commander Noel Rees said: “Working with

the Finnish Air Force as part of the JEF provides an opportunity to integrate more closely and develop our skills in a different environment in the High North.” RAF jets are supporting Finland’s Fighter Squadron 11, that provides round-the-clock surveillance of its airspace flying recently upgraded F/A-18 Hornet fighters said to be at the peak of their performance. The JEF training was approved by Finnish Defence Minister Antti Kaikkonen to strengthen the country’s defence capability and demonstrate partner nations’ support for Finland, which has been officially neutral since 1948.

It is being bolstered by Finnish and Swedish participation in what Nato describes as powerful demonstrations of its commitment to the strategically important area, including Exercise Baltops, currently underway with more than 7,000 forces from 14 Allies, and an Integrated Air and Missile Defence exercise across the Baltic region and Poland. Following his talks in Finland, aimed at building a ‘Strong, stable and responsible North’ – which included Norwegian Prime Minister Jonas Gahr Støre –Mr Stoltenberg travelled to Sweden for meetings with Prime Minister Magdalena Andersson and her government.

MORE THAN 50,000 aviation fans were treated to breath-taking flying displays as the curtain came up on Cosford Air Show for the first time in three years. The event – back after a Covid-enforced hiatus – featured highoctane routines from the Typhoon, Chinook and F-35 Lightning, plus star turns by the Red Arrows and the BBMF. The RAF&#39;s display teams will now head for Fairford for the Royal International Air Tattoo, which starts on July 15.