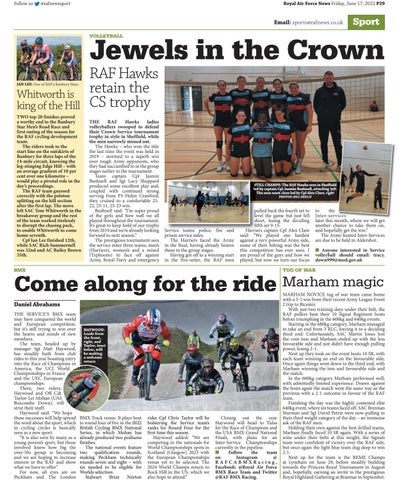 Jewels in the Crown

Whitworth is king of the Hill TWO top 20 finishes proved a worthy end to the Banbury Star Men’s Road Race and first outing of the season for the RAF cycling development team. The riders took to the start line on the outskirts of Banbury for three laps of the 14-mile circuit, knowing the leg-stinging Edge Hill – with an average gradient of 10 per cent over one kilometre – would play a pivotal role in the day’s proceedings. The RAF team guessed correctly with the peloton splitting on the hill section after the first lap. The move left SAC Tom Whitworth in the breakaway group and the rest of the team worked tirelessly to disrupt the chasing pack, to enable Whitworth to come home seventh. Cpl Ian Lee finished 12th, while SAC Rich Summernell was 32nd and AC Bailey Brown 35th.

THE RAF Hawks ladies volleyballers swooped to defend their Crown Service tournament trophy in style in Sheffield, while the men narrowly missed out. The Hawks – who won the title the last time the event was held in 2019 – stormed to a superb win over tough Army opponents, who they had succumbed to in the group stages earlier in the tournament. Team captain Cpl Jasmin Bushnell and Sgt Lucy Sheppard produced some excellent play and, coupled with continued strong serving from FS Helen Crawford, they cruised to a comfortable 2522, 25-11, 25-23 win. Bushnell said: “I’m super proud of the girls and how well we all played throughout the tournament. It’s great to keep hold of our trophy from 2019 and we’re already looking forward to next season.” The prestigious tournament sees the service enter three teams, men’s (Harriers), women’s and a mixed (Typhoons) to face off against Army, Royal Navy and emergency

Service teams police, fire and prison service sides. The Harriers faced the Army in the final, having already beaten them in the group stages. Having got off to a winning start in the five-setter, the RAF men

pulled back the fourth set to level the game but just fell short, losing the deciding fifth set 9-15. Harriers captain Cpl Alex Clare said: “We played our hardest against a very powerful Army side, some of their hitting was the best this competition has ever seen. I am proud of the guys and how we played, but now we turn our focus

to the Inter-services later this month, where we will get another chance to take them on, and hopefully get the win.” The Army-hosted Inter-Services are due to be held in Aldershot. n Anyone interested in Service volleyball should email: tracy. down999@mod.gov.uk

Come along for the ride Marham magic

Daniel Abrahams THE SERVICE’S BMX team may have conquered the world and European competition, but it’s still trying to win over the hearts and minds of new members. The team, headed up by manager Sgt Matt Haywood, has steadily built from club rides to this year boasting entry into the Race of Champions in America, the UCI World Championships in France and the UEC European championships. There, two riders, Haywood and Off Cdt Taylor-Lei Mohan (UAS Boscombe Down), will strut their stuff. Haywood said: “We hope these successes will help spread the word about the sport, which in cycling circles is basically seen as a new sport. “It is also seen by many as a young person’s sport, but those involved know how big the over-50s group is becoming and we are hoping to increase interest in the RAF and show what we have to offer.” For now, all eyes are on Peckham and The London

HAYWOOD: Leads from the front, right, and Taylor, inset below, will be making a welcome return

rider Cpl Chris Taylor will be bolstering the Service team’s ranks for Round Four for the first time this season. Haywood added: “We are competing in the nationals for World Championships spots in Scotland (Glasgow) 2023 with the European Championships venue yet to be selected. The 2024 World Champs return to Rock Hill in the US, which we also hope to attend.”

Closing out the year Haywood will head to Tulsa for the Race of Champions and the USA BMX Grand National Finals, with plans for an Inter-Service Championships currently in the pipeline. n Follow the team on Instagram @ RAFCABMXRacing, Facebook: @Royal Air Force BMX Race Team and Twitter @RAF BMX Racing.

MARHAM NOVICE tug of war team came home with a 3-1 win from their recent Army League Event 2 trip to Bicester. With just two training days under their belt, the RAF pullers beat their 10 Signal Regiment hosts before triumphing in the 600kg and 640kg events. Starting in the 680kg category, Marham managed to take an end from 3 RLC, forcing it to a deciding third end. Unfortunately, SAC Martin Jones lost the coin toss and Marham ended up with the less favourable side and just didn’t have enough pulling power, losing 2-1. Next up they took on the event hosts 10 SR, with each team winning an end on the favourable side. Once again things went down to the third end, with Marham winning the toss and favourable side and the match. In the 600kg category Marham performed well, with admittedly limited experience. Drawn against the hosts again the match went the same way as the previous with a 2-1 outcome in favour of the RAF team. Finishing the day was the highly contested elite 640kg event, where six teams faced off. SAC Brennan Sturman and Sgt David Petrie were now pulling in their third weight category of the day – an immense ask of the RAF men. Holding their own against the best drilled teams, Marham finally faced 10 SR again. With a series of wins under their belts at this weight, the Signals team were confident of victory over the RAF side, but once again the light blue team dug deep to win 2-1. Next up for the team is the REME Champs at Lyneham on June 29, before steadily building towards the Princess Royal Tournament in August and, hopefully, earning an invite to the prestigious Royal Highland Gathering at Braemar in September.