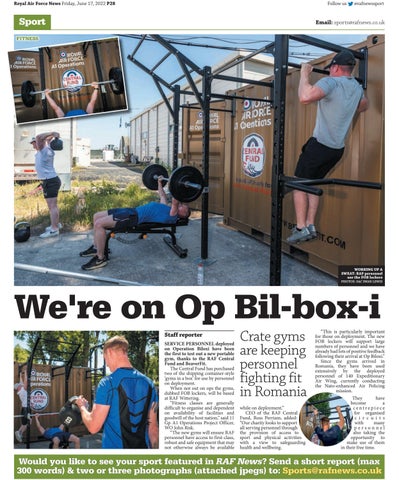 WORKING UP A SWEAT: RAF personnel use the FOB lockers

We&#39;re on Op Bil-box-i Staff reporter SERVICE PERSONNEL deployed on Operation Biloxi have been the first to test out a new portable gym, thanks to the RAF Central Fund and BeaverFit. The Central Fund has purchased two of the shipping container-style ‘gyms in a box’ for use by personnel on deployment. When not out on ops the gyms, dubbed FOB lockers, will be based at RAF Wittering. “Fitness classes are generally difficult to organise and dependent on availability of facilities and goodwill of the host nation,” said 11 Gp A1 Operations Project Officer, WO John Risk. “The new gyms will ensure RAF personnel have access to first-class, robust and safe equipment that may not otherwise always be available

Crate gyms are keeping personnel fighting fit in Romania while on deployment.” CEO of the RAF Central Fund, Ross Perriam, added: “Our charity looks to support all serving personnel through the provision of access to sport and physical activities with a view to safeguarding health and wellbeing.

“This is particularly important for those on deployment. The new FOB lockers will support large numbers of personnel and we have already had lots of positive feedback following their arrival at Op Biloxi.” Since the gyms arrived in Romania, they have been used extensively by the deployed personnel of 140 Expeditionary Air Wing, currently conducting the Nato-enhanced Air Policing mission. They have become a centrepiece for organised c i r c u i t s with many personnel also taking the opportunity to make use of them in their free time.