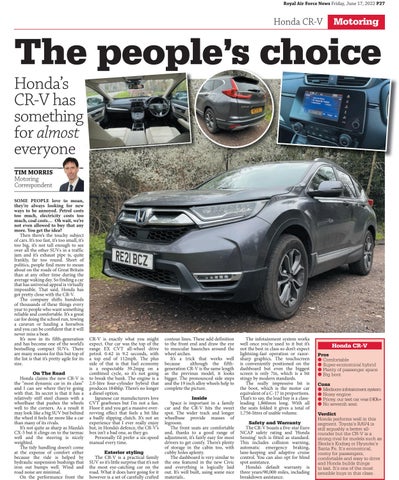 The people’s choice Honda’s CR-V has something for almost everyone TIM MORRIS Motoring Correspondent SOME PEOPLE love to moan, they’re always looking for new ways to be annoyed. Petrol costs too much, electricity costs too much, coal costs… Oh wait, we’re not even allowed to buy that any more. You get the idea? Then there’s the touchy subject of cars. It’s too fast, it’s too small, it’s too big, it’s not tall enough to see over all the other SUVs in a traffic jam and it’s exhaust pipe is, quite frankly, far too round. Short of politics, people find more to moan about on the roads of Great Britain than at any other time during the average waking day. So finding a car that has universal appeal is virtually impossible. That said, Honda has got pretty close with the CR-V. The company shifts hundreds of thousands of these things every year to people who want something reliable and comfortable. It’s a great car for doing the school run, towing a caravan or hauling a horsebox and you can be confident that it will never miss a beat. It’s now in its fifth-generation and has become one of the world’s bestselling compact SUVs. There are many reasons for this but top of the list is that it’s pretty agile for its size. On The Road Honda claims the new CR-V is the “most dynamic car in its class” and I can see where they’re going with that. Its secret is that it has a relatively stiff steel chassis with a wheelbase that pushes the wheels well to the corners. As a result it may look like a big SUV but behind the wheel it feels far more like a car than many of its rivals. It’s not quite as sharp as Mazda’s CX-5 but it clings on to the tarmac well and the steering is nicely weighted. The tidy handling doesn’t come at the expense of comfort either because the ride is helped by hydraulic suspension bushings that iron out bumps well. Wind and road noise are minimal. On the performance front the

CR-V is exactly what you might expect. Our car was the top of the range EX CVT all-wheel drive petrol. 0-62 in 9.2 seconds, with a top end of 112mph. The plus side of that is that fuel economy is a respectable 39.2mpg on a combined cycle, so it’s not going to break the bank. The engine is a 2.0-litre four-cylinder hybrid that produces 184bhp. There’s no longer a diesel option. Japanese car manufacturers love CVT gearboxes but I’m not a fan. Floor it and you get a massive overrevving effect that feels a bit like a badly slipping clutch. It’s not an experience that I ever really enjoy but, in Honda’s defence, the CR-V’s box isn’t a bad one, as they go. Personally I’d prefer a six-speed manual every time. Exterior styling The CR-V is a practical family SUV so it’s little surprise that it’s not the most eye-catching car on the road. What it does have going for it however is a set of carefully crafted

contour lines. These add definition to the front end and draw the eye to muscular haunches around the wheel arches. It’s a trick that works well because although the fifthgeneration CR-V is the same length as the previous model, it looks bigger. The pronounced side steps and the 19 inch alloy wheels help to complete the picture. Inside Space is important in a family car and the CR-V hits the sweet spot. The wider track and longer wheelbase provide masses of legroom. The front seats are comfortable and, thanks to a good range of adjustment, it’s fairly easy for most drivers to get comfy. There’s plenty of storage in the cabin too, with cubby holes aplenty. The dashboard is very similar to the one featured in the new Civic and everything is logically laid out. It’s well built, using some nice materials..

The infotainment system works well once you’re used to it but it’s not the best in class so don’t expect lightning-fast operation or razorsharp graphics. The touchscreen is conveniently positioned on the dashboard but even the biggest screen is only 7in, which is a bit stingy by modern standards. The really impressive bit is the boot, which is the motor car equivalent of a C-17 in proportions. That’s to say, the load bay is a classleading 1,860mm long. With all the seats folded it gives a total of 1,756-litres of usable volume. Safety and Warranty The CR-V boasts a five-star Euro NCAP safety rating and ‘Honda Sensing’ tech is fitted as standard. This includes collision warning, automatic emergency braking, lane-keeping and adaptive cruise control. You can also opt for blind spot assistance. Honda’s default warranty is three years/90,000 miles, including breakdown assistance.