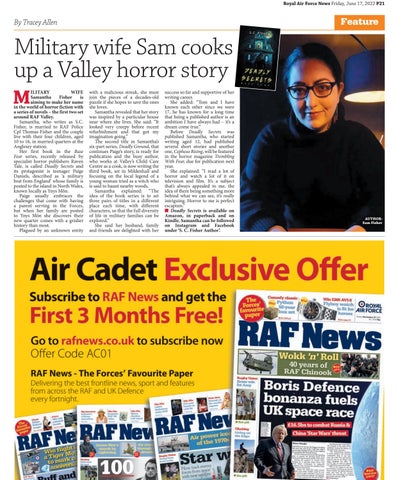 ILITARY WIFE Samantha Fisher is aiming to make her name in the world of horror fiction with a series of novels – the first two set around RAF Valley. Samantha, who writes as S.C. Fisher, is married to RAF Police Cpl Thomas Fisher and the couple live with their four children, aged 10 to 16, in married quarters at the Anglesey station. Her first book in the Base Fear series, recently released by specialist horror publishers Raven Tale, is called Deadly Secrets and its protagonist is teenager Paige Daniels, described as ‘a military brat from England’ whose family is posted to the island in North Wales, known locally as Ynys Môn. Paige usually embraces the challenges that come with having a parent serving in the Forces, but when her family are posted to Ynys Môn she discovers their new quarter comes with a grislier history than most. Plagued by an unknown entity

with a malicious streak, she must join the pieces of a decades-old puzzle if she hopes to save the ones she loves. Samantha revealed that her story was inspired by a particular house near where she lives. She said: “It looked very creepy before recent refurbishment and that got my imagination going.” The second title in Samantha’s six-part series, Deadly Ground, that continues Paige’s story, is ready for publication and the busy author, who works at Valley’s Child Care Centre as a cook, is now writing the third book, set in Mildenhall and focusing on the local legend of a young woman tried as a witch who is said to haunt nearby woods. Samantha explained: “The idea of the book series is to set three pairs of titles in a different place each time, with different characters, so that the full diversity of life in military families can be explored.” She said her husband, family and friends are delighted with her

success so far and supportive of her writing career. She added: “Tom and I have known each other since we were 17, he has known for a long time that being a published author is an ambition I have always had – it’s a dream come true.” Before Deadly Secrets was published Samantha, who started writing aged 12, had published several short stories and another one, Cepheus Rising, will be featured in the horror magazine Trembling With Fear, due for publication next year. She explained: “I read a lot of horror and watch a lot of it on television and film. It’s a subject that’s always appealed to me, the idea of there being something more behind what we can see, it’s really intriguing. Horror to me is perfect escapism.” n Deadly Secrets is available on Amazon, in paperback and on Kindle. Samantha can be followed on Instagram and Facebook under ‘S. C. Fisher Author’.