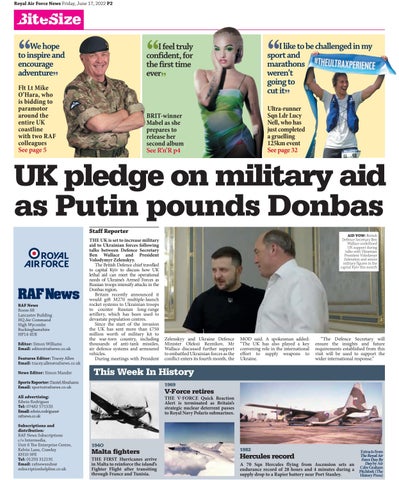 We hope to inspire and encourage adventure”

I feel truly confident, for the first time ever”

Flt Lt Mike O’Hara, who is bidding to paramotor around the entire UK coastline with two RAF colleagues See page 5

THE UK is set to increase military aid to Ukrainian forces following talks between Defence Secretary Ben Wallace and President Volodymyr Zelenskyy. The British Defence chief travelled to capital Kyiv to discuss how UK lethal aid can meet the operational needs of Ukraine’s Armed Forces as Russian troops intensify attacks in the Donbas region. Britain recently announced it would gift M270 multiple-launch rocket systems to Ukrainian troops to counter Russian long-range artillery, which has been used to devastate population centres. Since the start of the invasion the UK has sent more than £750 million worth of military kit to the war-torn country, including thousands of anti-tank missiles, air defence systems and armoured vehicles. During meetings with President

“The Defence Secretary will ensure the insights and future requirements established from this visit will be used to support the wider international response.”

MOD said. A spokesman added: “The UK has also played a key convening role in the international effort to supply weapons to Ukraine.

Malta fighters THE FIRST Hurricanes arrive in Malta to reinforce the island’s Fighter Flight after transiting through France and Tunisia.

Hercules record A 70 Sqn Hercules flying from Ascension sets an endurance record of 28 hours and 4 minutes during a supply drop to a Rapier battery near Port Stanley.